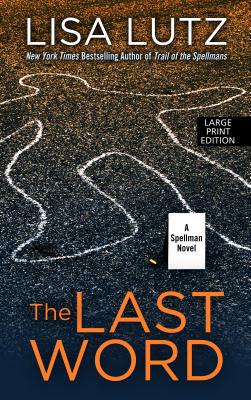 By Lisa Lutz
Unavailable. Orders will be auto-cancelled.

The sixth installment of the critically acclaimed, "New York Times" bestselling, Edgar- and Macavity-nominated and Alex Award-winning series by Lisa Lutz, finds our intrepid heroine of the series, Isabel Spellman, PI, at a crossroads. Izzy is used to being followed, extorted, and questioned all occupational hazards of working at her family s firm, Spellman Investigations. Her little sister, Rae, once tailed Izzy for weeks on end to discover the identity of Izzy s boyfriend. Her mother, Olivia, once blackmailed Izzy with photo-graphic evidence of Prom Night 1994. It seemed that Spellman vigilance would dis-sipate after Izzy was fired for breaching client confidentiality, but then Izzy avenged her dismissal by staging a hostile takeover of the company. She should have known better than to think she could put such she-nanigans behind her.
In "The Last Word," Izzy s troubles are just beginning. After her takeover of Spellman Investigations, her employees are the fur-thest thing from collegial...and Izzy finds herself struggling to pay the bills. But when she is accused of embezzling from a former client, the ridiculously wealthy Mr. Slayter, the stakes become immense. If Izzy gets indicted, she could lose her PI license and the Spellman family s livelihood, not to mention her own freedom. Is this the end of Izzy Spellman, PI?
"The Last Word" is, hands down, the most powerful book in the bestselling, award-nominated Spellman series.