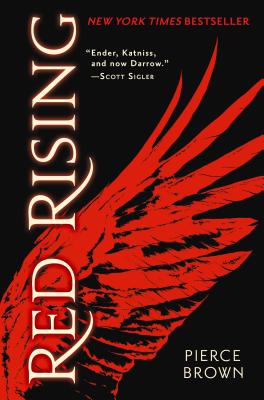 By Pierce Brown
Unavailable. Orders will be auto-cancelled.

"NEW YORK TIMES" BESTSELLER
"Ender, Katniss, and now Darrow."--Scott Sigler
" "
Pierce Brown's relentlessly entertaining debut channels the excitement of "The Hunger Games" by Suzanne Collins and "Ender's Game "by Orson Scott Card.
""I live for the dream that my children will be born free," she says. "That they will be what they like. That they will own the land their father gave them."
"I live for you," I say sadly.
Eo kisses my cheek. "Then you must live for more.""
Darrow is a Red, a member of the lowest caste in the color-coded society of the future. Like his fellow Reds, he works all day, believing that he and his people are making the surface of Mars livable for future generations. Yet he spends his life willingly, knowing that his blood and sweat will one day result in a better world for his children.
But Darrow and his kind have been betrayed. Soon he discovers that humanity reached the surface generations ago. Vast cities and sprawling parks spread across the planet. Darrow--and Reds like him--are nothing more than slaves to a decadent ruling class.
Inspired by a longing for justice, and driven by the memory of lost love, Darrow sacrifices everything to infiltrate the legendary Institute, a proving ground for the dominant Gold caste, where the next generation of humanity's overlords struggle for power. He will be forced to compete for his life and the very future of civilization against the best and most brutal of Society's ruling class. There, he will stop at nothing to bring down his enemies . . . even if it means he has to become one of them to do so.
Praise for "Red Rising"
" "
" A] spectacular adventure . . . one heart-pounding ride . . . Pierce Brown's dizzyingly good debut novel evokes "The Hunger Games, Lord of the Flies, "and" Ender's Game." . . . "Red Rising"] has everything it needs to become meteoric."--"Entertainment Weekly"
" A] top-notch debut novel . . . "Red Rising" ascends above a crowded dystopian field."--"USA Today"
" "
""Red Rising" is a sophisticated vision. . . . Brown will find a devoted audience."--"Richmond Times-Dispatch"
"A story of vengeance, warfare and the quest for power . . . reminiscent of "The Hunger Games "and" Game of Thrones."""--Kirkus Reviews"
" "
"Fast-paced, gripping, well-written--the sort of book you cannot put down. I am already on the lookout for the next one."--Terry Brooks, "New York Time"s bestselling author of "The Sword of Shannara"
"Pierce Brown has done an astounding job at delivering a powerful piece of literature that will definitely make a mark in the minds of readers."--"The Huffington Post"
" "
"Compulsively readable and exceedingly entertaining . . . a must for both fans of classic sci-fi and fervent followers of new school dystopian epics."--"Examiner.com"
" A] great debut . . . The author gathers a spread of elements together in much the same way George R. R. Martin does."--"Tor.com"
"Pierce Brown's empire-crushing debut is a sprawling vision."--Scott Sigler, "New York Times" bestselling author of "Pandemic"
" "
"A Hollywood-ready story with plenty of action and thrills."--"Publishers Weekly"

Pierce Brown spent his childhood building forts and setting traps for cousins in the woods of six states and the deserts of two. Graduating from college in 2010, he fancied the idea of continuing his studies at Hogwarts. Unfortunately, he doesn't have a magical bone in his body. So while trying to make it as a writer, he worked as a manager of social media at a startup tech company, toiled as a peon on the Disney lot at ABC Studios, did his time as an NBC page, and gave sleep deprivation a new meaning during his stint as an aide on a U.S. Senate campaign. Now he lives Los Angeles, where he scribbles tales of spaceships, wizards, ghouls, and most things old or bizarre. "From the Hardcover edition."