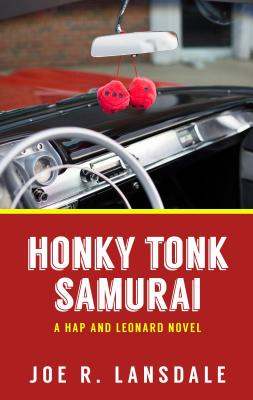 By Joe R. Lansdale
Out of Print

NOW THE BASIS OF THE NEW SERIES ON SUNDANCETV.
Only Hap and Leonard would catch a cold case with hot cars, hot women, and ugly skinheads.
The story starts simply enough when Hap, a former 60s activist and self-proclaimed white trash rebel, and Leonard, a tough black, gay Vietnam vet and Republican with an addiction to Dr. Pepper, are working a freelance surveillance job in East Texas. The uneventful stakeout is coming to an end when the pair witness a man abusing his dog. Leonard takes matters into his own fists, and now the bruised dog abuser wants to press charges.
One week later, a woman named Lilly Buckner drops by their new PI office with a proposition: find her missing granddaughter, or she'll turn in a video of Leonard beating the dog abuser. The pair agrees to take on the cold case and soon discover that the used car dealership where her granddaughter worked is actually a front for a prostitution ring. What began as a missing-person case becomes one of blackmail and murder.
Filled with Lansdale's trademark whip-smart dialogue, relentless pacing, and unorthodox characters, "Honky Tonk Samurai" is a rambunctious thrill ride by one hell of a writer.

JOE R. LANSDALE is the author of more than three dozen novels, including" Paradise Sky," the Edgar Award-winning "The Bottoms," "Sunset" and "Sawdust," and "Leather Maiden." He has received eleven Bram Stoker Awards, the American Mystery Award, the British Fantasy Award, the Raymond Chandler Award, and the Grinzane Cavour Prize for Literature. He lives with his family in Nacogdoches, Texas.