Eat My Globe: One Year to Go Everywhere and Eat Everything (Hardcover) 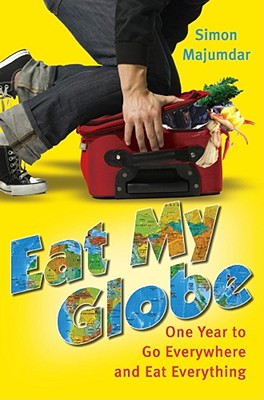 When Simon Majumdar hit forty, he realized there had to be more to life than his stable but uninspiring desk job. As he wondered how to escape his career, he rediscovered a list of goals he had scrawled out years before, the last of which said: Go everywhere, eat everything. With that, he had found his mission -- a yearlong search for the delicious, and curious, and the curiously delicious, which he names Eat My Globe and memorably chronicles in these pages.

In Majumdar's world, food is everything. Like every member of his family, he has a savant's memory for meals, with instant recall of dishes eaten decades before. Simon's unstoppable wit and passion for all things edible (especially those things that once had eyes, and a face, and a mom and a pop) makes this an armchair traveler's and foodie's delight -- Majumdar does all the heavy lifting, eats the heavy foods (and suffers the weighty consequences), so you don't have to. He jets to thirty countries in just over twelve months, diving mouth-first into local cuisines and cultures as different as those of Japan and Iceland. His journey takes him from China, where he consumes one of his "Top Ten Worst Eats," stir-fried rat, to the United States, where he glories in our greatest sandwiches: the delectable treasures of Katz's Delicatessen in Manhattan, BBQ in Kansas and Texas, the still-rich po' boys of post-Katrina New Orleans.

The meat of the story -- besides the peerless ham in Spain, the celebrated steaks of Argentina, the best of Münich's wursts as well as their descendants, the famous hot dogs of Chicago -- is the friends that Simon makes as he eats. They are as passionate about food as he is and are eager to welcome him to their homes and tables, share their choicest meals, and reveal their local secrets. Also a poignant memoir, Eat My Globe is a life told through food and spiced with Majumdar's remembrances of foods past, including those from his colorful childhood. (Raised in Northern England, he is the son of a fiery Welsh nurse and a distinguished Bengali surgeon.) A captivating look at one man's passion for food, family, and unique life experiences, Eat My Globe will make you laugh -- while it makes you hungry. It is sure to satiate any gastronome obsessed with globetrotting -- for now.