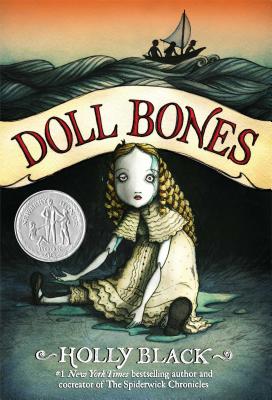 Winner of a 2014 Newbery Honor Medal.

Zach, Poppy, and Alice have been friends forever. And for almost as long, they’ve been playing one continuous, ever-changing game of pirates and thieves, mermaids and warriors. Ruling over all is the Great Queen, a bone-china doll cursing those who displease her.

But they are in middle school now. Zach’s father pushes him to give up make-believe, and Zach quits the game. Their friendship might be over, until Poppy declares she’s been having dreams about the Queen—and the ghost of a girl who will not rest until the bone-china doll is buried in her empty grave.

Zach and Alice and Poppy set off on one last adventure to lay the Queen’s ghost to rest. But nothing goes according to plan, and as their adventure turns into an epic journey, creepy things begin to happen. Is the doll just a doll or something more sinister? And if there really is a ghost, will it let them go now that it has them in its clutches?

Doll Bones is a winner of the Newbery Honor, is the recipient of six starred reviews, was on four Best Book lists, and was called "perfect" by The New York Times.

Holly Black is the #1 New York Times bestselling and award-winning author of speculative and fantasy novels, short stories, and comics. She has been a finalist for an Eisner and a Lodestar Award, and the recipient of the Mythopoeic and Nebula Awards and a Newbery Honor. She has sold over twenty-six million books worldwide, and her work has been translated into over thirty languages and adapted for film. She currently lives in New England with her husband and son in a house with a secret library. Visit her at BlackHolly.com.

"A little bit scary and full of heart, this story grabbed me and wouldn't let go."
— Rebecca Stead, Newbery Award winning author of When You Reach Me

"Nobody does spooky like Holly Black. Doll Bones is a book that will make you sleep with the lights on."
— Jeff Kinney, author of the Diary of a Wimpy Kid series

"Tightly focused, realistic tale—bladed with a hint of fairy-tale darkness.... Stories about the importance of stories...don’t come much more forthright and affecting than this one."
— Booklist, starred review

"It's as psychologically haunting as the ghost girl's physical haunting....Black begins with an ordinary experience of childhood and gives it a wicked twist to reveal the truth at the center of the impulse for storytelling."
— Jennifer M. Brown

"For the 10-12 year-old reader...Doll Bones may be perfect....It’s a deep, strange and compelling book, at times lovely, at times heartbreaking and deliciously weird.”
— Lauren Oliver

*"This novel is a chilling ghost story, a gripping adventure, and a heartwarming look at the often-painful pull of adulthood."
— School Library Journal, starred review

*"Black manages a careful balancing act of reality and fantasy, using the effectively creepy ghost story as the backdrop to a poignant exploration of what is lost along the way to adulthood...Keenly felt."
— BCCB, starred review

"Compelling, chill-at-the-nape tale with dynamics and emotional depth... The novel’s eerie vibe and eek-worthy plot may keep readers turning pages into the wee hours, but it’s the vivid characters and skillfully developed themes of identity, friendship and loss that linger long in the mind."
— The Washington Post

Hand this book to any middle schooler and they will immediately relate to that tween feeling of moving from childhood to adolescence.
— Library Media Connection