The Hellish Vortex: Between Breakfast and Dinner (Paperback) 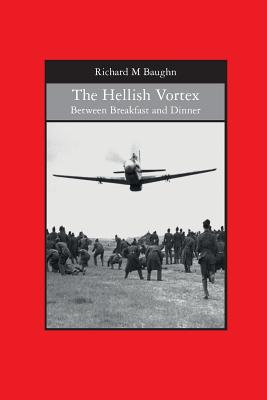 BGen Richard M. Baughn USAF (ret), who flew P-51's with the 8th AF during WWII, has written a carefully researched historical novel that provides the reader with a graphic view of how the young USAAF airmen lived, fought and died. He also weaves relevant Anglo/American politics and American prewar interservice turf battles into the story and includes testimony by the German military and high ranking civilians to counter the detractors of the USAAF's contribution to the war against Germany. Although the D-Day invasion of France is the centerpiece of the battle to end the Nazi occupation of Europe, the author reminds the reader that 60,000 British/American airmen were shot down or killed before D-Day. His research also reveals that 41,802 of the approximate 100,000 US Army Air Force pilots, navigators, bombardiers and aerial gunners assigned in Europe were killed in the fiercest aerial combat the world has seen. The US Navy, 3.3 million strong, lost 36,950 during WWII and 19,733 US Marines were killed from a total force of 475,604. "I started writing this book at the age of 84, because at the time, I read a best seller about a P-51 pilot in the 8th AF during WWII. It was a good read, but didn't come close to telling the real story. My read of the best seller followed 65 years of observing how the accomplishments and sacrifices of the USAAF had been under told, ignored, or warped by stories about its mistakes. As a career air force officer, I decided to write a historical novel in an attempt to reach a broad audience--because I wanted to sing to more than just the choir.

BGen Richard M. Baughn was born in Council Bluffs, Iowa in 1923, graduated from Abraham Lincoln High School and received a BS from the University of Maryland. His military schools include the USAF Air Tactical School, The Armed Forces Staff College and Great Britain's senior military school, The Imperial Defence College. During WWII he trained in P-40's and flew combat in P-51's with the 8th Air Force in Britain. He has also flown P-47's, F-80's, F-84's, F-86's, F-100's, F-104's, F-105's, F-4's A-6 and F-111's and has more than 7600 hours flying time, mostly in fighters. In 1965-66 he flew F-105's in combat over North Vietnam and had a second tour in Saigon in 1974-75. His decorations include the Silver Star, Legion of Merit, three Distinguished Flying Crosses, Bronze Star Medal, 15 Air Medals and two Air Force Commendation Medals.