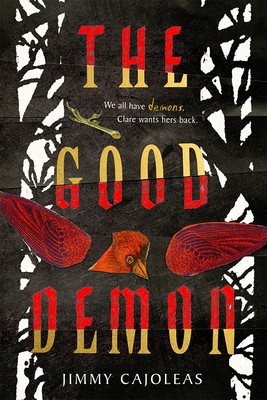 By Jimmy Cajoleas
$18.99
Backordered. Place an order and we will let you know when to expect your book.

It wasn’t technically an exorcism, what they did to Clare. When the reverend and his son ripped her demon from her, they called it a “deliverance.” But they didn’t understand that Clare and her demon—known simply as Her—were like sisters. She comforted Clare, made her feel brave, helped to ease her loneliness. They were each other’s Only.

Now, Clare’s only comforts are the three clues that She left behind:
Be nice to him
June 20
Remember the stories

Clare will do anything to get Her back, even if it means teaming up with the reverend’s son and scouring every inch of her small, Southern town for answers. But if she sacrifices everything to bring back her demon, what will be left of Clare?

Jimmy Cajoleas grew up in Jackson, Mississippi. He spent years traveling the country and playing music before earning his MFA from the University of Mississippi. His debut YA novel, The Good Demon, received three starred reviews, from Booklist, Publishers Weekly, and Kirkus, who called it “eerie and compelling.” He lives in Brooklyn, New York.

**STARRED REVIEW**
"Evocative language will grab readers by the throat and forge an unforgiving connection to Clare's despair and desperation. The gorgeous black-and-white artwork centered on mysterious symbols has a palpable mysticism about it . . . Eerie and compelling. Fast track it to the top of the TBR pile."
— Kirkus Reviews

**STARRED REVIEW**
"Cajoleas builds a wonderfully macabre mood in his southern gothic novel, filled with economic ruin, witchcraft, religious zealotry, and grotesque moments of horror . . . Thoughtful, compassionate, and subtle commentary on faith, addiction, and grief is icing on an already captivating (and chilling) cake.  Readers who like their horror on the literary side will love this."
— Booklist

**STARRED REVIEW**
"With a careful build and a terrifying first-person narration, Cajoleas (Goldeline) offers up a story interested in free will that is as gently ominous as a silent car coasting over a road on a hot, humid summer night."
— Publishers Weekly

"Cajoleas pulls off an impressive feat here, initially presenting Clare as a highly unreliable narrator and then making it very clear that it’s the people around her who are living in their twisted version of reality. . . . Blood and violence meet a crisis of identity in a compelling story for lovers of disturbing, resonant fantasy."
— The Bulletin of the Center for Children's Books