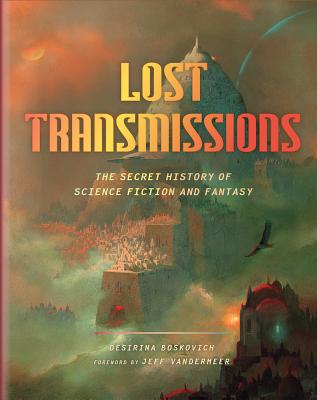 A fascinating illustrated history of lost, overlooked, and uncompleted works of science fiction and fantasy

Desirina Boskovich has written for Lightspeed, Tor, Weird Fiction Review, and the Huffington Post, and she has contributed fiction to Clarkesword Magazine, and F&SF. She is the coauthor of The Steampunk User’s Manual and lives in Nevada, Missouri.

“Boskovich sets the tone with a conversational style that enwraps solid scholarship…the collection will broaden your horizons and turn you on to wonders bubbling under the mass-market commodified pleasures to which we all too often limit ourselves.”
— The Washington Post

“My only complaint about “Lost Transmissions” is that there isn’t more of it…Buy this book because it is beautiful, but also so they’ll make another.”
— The Houston Chronicle

“This treasure trove of secrets, presented in a generously illustrated hardbound volume, is like a gateway into science fiction’s inner sanctum.”
— Kirkus Reviews

“…a fascinating enrichment of the history of sf and fantasy."
— Booklist

“Boskovich is to be commended for her editorial selection and for doing the heavy lifting of writ­ing 44 well-researched essays on a wide variety of thoughtfully curated subjects and figures.”
— Locus Magazine