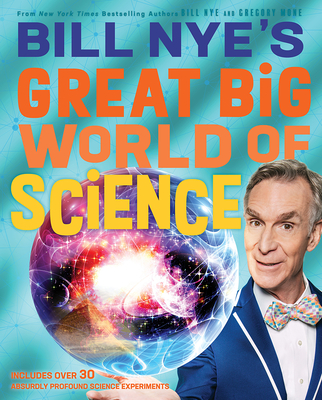 By Bill Nye, Gregory Mone
$29.99
Backordered. Place an order and we will let you know when to expect your book.

Gregory Mone is a New York Times–bestselling author and science journalist who has written several books for children, including the Jack and the Geniuses series, coauthored with Bill Nye. He lives in Martha’s Vineyard, Massachusetts.

**STARRED REVIEW**
"Challenge[s] readers to ponder still-unsolved scientific posers. . . The full-color graphic and photographic images not only reflect the overall 'get this!' tone but consistently enrich the flow of facts and reflections. 'Our universe is a strange and surprising place,' Nye writes. 'Stay curious.' Words to live by. Wordplay and wry wit put extra fun into a trove of fundamental knowledge."
— Kirkus Reviews

**STARRED REVIEW**
"A timely and eco-conscious children’s science book. Combine the effervescent and enduring appeal of Bill Nye with solid science and the result is a winner."
— School Library Journal