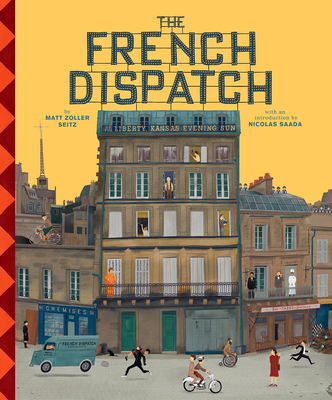 The French Dispatch—the tenth feature film from writer-director Wes Anderson—is a love letter to journalists set at the titular American newspaper in the fictional 20th-century French city of Ennui-sur-Blasé. The film stars a number of Anderson's frequent collaborators, including Bill Murray as the newspaper's editor in chief; Owen Wilson, Tilda Swinton, and Frances McDormand, as well as new players Jeffrey Wright, Benicio del Toro, Elisabeth Moss, and Timothée Chalamet, who bring to life a collection of stories published in The French Dispatch magazine.

In this latest one-volume entry in The Wes Anderson Collection series—the only book to take readers behind the scenes of The French Dispatch—everything that goes into bringing Anderson's trademark style, meticulous compositions, and exacting production design to the screen is revealed in detail. Written by film and television critic and New York Times bestselling author Matt Zoller Seitz, The Wes Anderson Collection: The French Dispatch presents the complete story behind the film’s conception, anecdotes about the making of the film, and behind-the-scenes photos, production materials, and artwork.

Max Dalton is a graphic artist living in Buenos Aires, Argentina by way of Barcelona, New York, and Paris. He has published a few books and illustrated some others, including The Wes Anderson Collection (Abrams, 2012) and The Wes Anderson Collection: The Grand Budapest Hotel (Abrams 2014). Max started painting in 1977 and since 2008, he has been creating posters about music, movies, and pop culture.