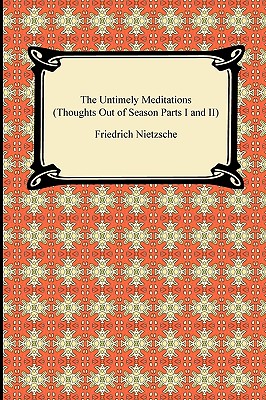 Written between 1873 and 1876, The "Untimely Meditations", or "Thoughts out of Season" is a collection of four essays by famed philosopher Friedrich Nietzsche. In the first essay 'David Strauss: the Confessor and the Writer', Nietzsche attacks David Strauss' "The Old and the New Faith: A Confession". In the second essay 'On the Use and Abuse of History for Life', Nietzsche presents an alternative way of reading history, one where living life becomes the primary concern. In the third essay 'Schopenhauer as Educator', Nietzsche describes how the philosophic genius of Schopenhauer might bring on a resurgence of German culture. In the fourth and final essay 'Richard Wagner in Bayreuth', Nietzsche investigates the music, drama and personality of Richard Wagner. Nietzsche originally planned this work to comprise thirteen essays but it is suggested that he lost interest in the work after writing just four. In this early philosophical work one can begin to see the development of a brilliant philosophical mind, which would become more evidenced by his later works.