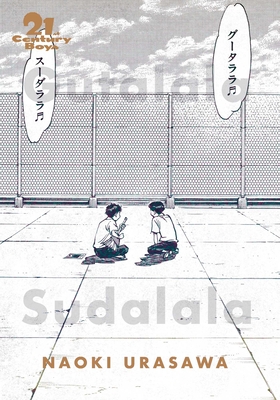 A deluxe bind-up edition of Naoki Urasawa’s award-winning epic of doomsday cults, giant robots and a group of friends trying to save the world from destruction!

Humanity, having faced extinction at the end of the 20th century, would not have entered the new millennium if it weren't for them. In 1969, during their youth, they created a symbol. In 1997, as the coming disaster slowly starts to unfold, that symbol returns. This is the story of a group of boys who try to save the world.

The war is over. The Friend is dead. Finally free from the threat of extinction, peace has come to the people of Tokyo once again. But the mystery surrounding the Friend still remains. Nobody knows who the Friend was or where he came from, and the only clue is hidden deep in the Kenji’s memories. The time has come to open Pandora’s box and see what was left behind.

Naoki Urasawa’s career as a manga artist spans more than thirty years and has firmly established him as one of the true manga masters of Japan. Born in Tokyo in 1960, Urasawa debuted with BETA!! in 1983 and hasn’t stopped his impressive output since. Well-versed in a variety of genres, Urasawa’s oeuvre encompasses a multitude of different subjects, such as a romantic comedy (Yawara! A Fashionable Judo Girl), a suspenseful human drama about a former mercenary (Pineapple ARMY; story by Kazuya Kudo), an intriguing detective series taking place around the world (Master Keaton; story by Hokusei Katsushika, Takashi Nagasaki), a captivating psychological suspense story (Monster), a sci-fi adventure manga (20th Century Boys), and a modern reinterpretation of the work of the God of Manga, Osamu Tezuka (Pluto: Urasawa x Tezuka; co-authored with Takashi Nagasaki, supervised by Macoto Tezka, and with the cooperation of Tezuka Productions). Many of his books have spawned popular animated and live-action TV programs and sci-fi films, and 2008 saw the theatrical release of the first of three live-action Japanese films based on 20th Century Boys.

No stranger to accolades and awards, Urasawa received the 2011 and 2013 Eisner Award for Best U.S. Edition of International Material—Asia, as well as an award at the Angoulême International Comics Festival, and is a three-time recipient of the prestigious Shogakukan Manga Award, a two-time recipient of the Osamu Tezuka Cultural Prize, and also received the Kodansha Manga Award. Urasawa has also become involved in the world of academia, and in 2008 accepted a guest teaching post at Nagoya Zokei University, where he teaches courses in, of course, manga.

“If you’re itching for adventure, and are craving something to instill your waning faith in humanity, I implore you. Let these works transport you. Fly Urasawa Air.
It’ll get you where you need to go."