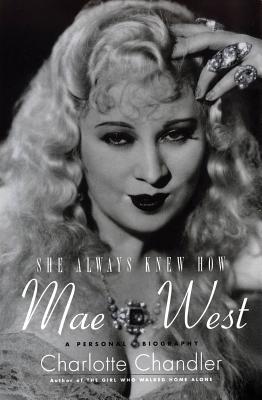 Actress, playwright, screenwriter, and iconic sex symbol Mae West (1893-1980) created a scandal and a sensation on Broadway with her play Sex in 1926. Convicted of obscenity, she was sentenced to ten days in prison. She went to jail a convict but emerged a star. Later, in Hollywood, she was the number one box-office attraction during the 1930s and saved Paramount Studios from bankruptcy. Her films included some notorious one-liners - which she wrote herself - that have become part of Hollywood lore. But behind the clever quips was Mae's deep desire, decades before the word "feminism" was in the news, to see women treated equally with men. She saw through the double standard of the time that permitted men to do things that women would be ruined for doing. Her cause was sexual equality, and she was shrewd enough to know that it was perhaps the ultimate battleground. In She Always Knew How, Charlotte Chandler draws on a series of extensive interviews that she conducted with Mae West just months before the star's death. Chandler also spoke with actors and directors who knew and worked with Mae, the man with whom she lived for the last twenty-seven years of her life, and her close assistant. Their insights enrich this fascinating book.