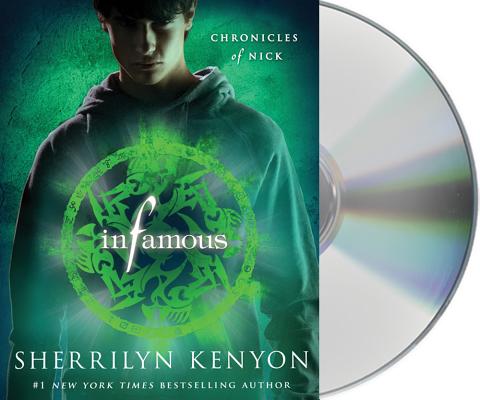 By Sherrilyn Kenyon, Holter Graham (Read by)
$29.99
Not available to order.

This is book number 3 in the Chronicles of Nick series.

The world has fallen in love with Nick Gautier and Sherrilyn Kenyon's Dark-Hunter novels.

Now Nick's saga continues in Infamous, the next eagerly anticipated volume in the Chronicles of Nick series...

Go to school. Get good grades. Stay out of trouble. That's the mandate for most kids. But Nick Gautier isn't the average teenager. He's a boy with a destiny not even he fully understands. And his first mandate is to stay alive while everyone, even his own father, tries to kill him.

He's learned to annihilate zombies and raise the dead, divination and clairvoyance, so why is learning to drive and keep a girlfriend so dang hard? But that isn't the primary skill he has to master. Survival is.

And in order to survive, his next lesson makes all the others pale in comparison. He is on the brink of becoming either the greatest hero mankind has ever known.

Or he'll be the one who ends the world. With enemies new and old gathering forces, he will have to call on every part of himself to fight or he'll lose everyone he cares about.

His film credits include Fly Away Home, Maximum Overdrive, Hairspray, and The Diversion, a short film which he acted in and produced. On television, he has appeared in Army Wives, Damages, As The World Turns, Rescue Me, Law & Order and New York Undercover. He received a B.A. from Skidmore College and an M.F.A. from Vermont College.

“Alternating tones, pacing, and inflections to voice all the characters, Graham smoothly narrates this action-packed, suspenseful tale, a must-listen for series fans.” —Booklist

“[A] publishing phenomenon…[Sherrilyn Kenyon is] the reigning queen of the wildly successful paranormal scene. . .Just one example of arguably the most in-demand and prolific authors in America these days.” —Publisher's Weekly

“Kenyon's writing is brisk, ironic and relentless imaginative. These are not your mother's vampire novels.” —Boston Globe