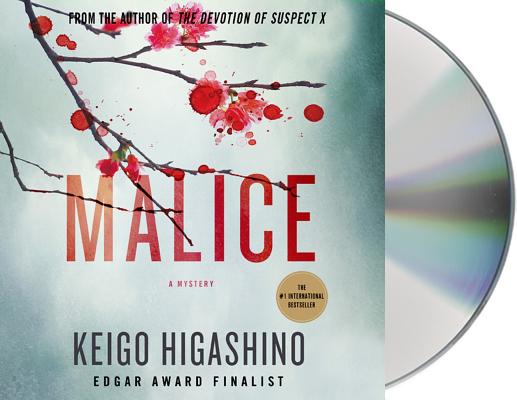 By Keigo Higashino, Jeff Woodman (Read by), Alexander O. Smith (Translated by)
$29.99
Backordered. Place an order and we will let you know when to expect your book.

Acclaimed bestselling novelist Kunihiko Hidaka is found brutally murdered in his home on the night before he's planning to leave Japan and relocate to Vancouver. His body is found in his office, a locked room, within his locked house, by his wife and his best friend, both of whom have rock solid alibis. Or so it seems.

At the crime scene, Police Detective Kyochiro Kaga recognizes Hidaka's best friend, Osamu Nonoguchi. Years ago when they were both teachers, they were colleagues at the same public school. Kaga went on to join the police force while Nonoguchi eventually left to become a full-time writer, though with not nearly the success of his friend Hidaka.

As Kaga investigates, he eventually uncovers evidence that indicates that the two writers' relationship was very different that they claimed, that they were anything but best friends. But the question before Kaga isn't necessarily who, or how, but why. In a brilliantly realized tale of cat and mouse, the detective and the killer battle over the truth of the past and how events that led to the murder really unfolded. And if Kaga isn't able to uncover and prove why the murder was committed, then the truth may never come out.

Jeff Woodman is the winner of multiple Earphones Awards, and he was named the 2008 Best Voice in Fiction & Classics as well as one of the “Fifty Greatest Voices of the Century” by AudioFile magazine.  His credits include Midnight in the Garden of Good and Evil, The Life of Pi, and The Curious Incident of the Dog in the Night-Time.  Some of his non-fiction works include Dr. Perricone's 7 Secrets to Beauty, Health and Longevity and The Intellectual Devotional: American History.

On stage, Woodman starred in the title role in Tennessee William's The Notebook of Trigorin, and he received the S.F. Bay Area Critic's Circle Award for his performance in An Ideal Husband.  Woodman has also participated in numerous ESL programs and cartoon voices for Japanese animation.

“Keigo Higashino again proves his mastery of the diabolical puzzle mystery with Malice, a story with more turns, twists, switchbacks and sudden stops than a Tokyo highway during Golden Week.” —The New York Times Book Review

“This smart and original mystery is a true page-turner... will baffle, surprise, and draw out suspicion until the final few pages. With each book, Higashino continues to elevate the modern mystery as an intense and inventive literary form.” —Library Journal (starred review)

“Fiendishly clever... Higashino offers one twist after another... Readers will marvel at the artful way the plot builds to the solution.” —Publishers Weekly (starred review)

“The creator of Detective Galileo (Salvation of a Saint, 2012, etc.) returns with another fiendishly clever Chinese--make that Japanese--box of a whydunit... If you still miss the days of The Murder of Roger Ackroyd, you can't do better than this fleet, inventive retro puzzler.” —Kirkus Reviews