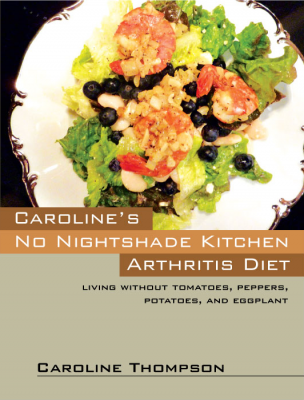 Caroline's No Nightshade Kitchen: Arthritis Diet Living without Tomatoes, Peppers, Potatoes, and Eggplant Caroline's No Nightshade Kitchen: Arthritis Diet is a book about finding relief from the pain and inflammation of arthritis when every other treatment and prescription failed. The following excerpts from my cookbook explain how arthritis suddenly changed my life, and how I'm changing it back with delicious foods and a life that is pain free. My simple story and fourteen year history In 1998, I began to notice pain and swelling in the knuckles of my hands. The discomfort was sudden and became severe. I'm an abstract oil painter, and was concerned that I would lose my ability to paint. It became apparent that not only would I be unable to paint, but there were other things I could no longer do well. I was frightened and there seemed to be no end to the misery. It never occurred to me that the inflammation I was experiencing in my hands could be related to the hot chili peppers and tomatoes I ate almost every day. During the next three years, I went to many doctors who administered every arthritis prescription available at the time, but the medications actually made the pain worse. I spent thousands of dollars trying to find an answer that would give me relief, but my discomfort only increased. I felt hopeless and desperate as the pain intensified and the disfiguration of my hands worsened. In 2001, I was visiting a friend who is very knowledgeable about numerous types of alternative healthcare. She noticed my bright red hands and asked if I knew anything about nightshades and arthritis. She explained that nightshade plants (tomatoes, peppers, white potatoes, and eggplant) had been proven to affect some people severely who have arthritis. I thought she was crazy. I couldn't believe giving up many of the foods I enjoyed eating would make a difference. However, because the pain had been severe for three years, and I was truly desperate, I began the experiment my friend suggested the next day, but with little hope a dietary change would lessen my pain. I try to refrain from using the word miracle; but to be honest it was a miracle to me because the pain and swelling stopped completely in a few days. I was fortunate that improvement came quickly, and I'm grateful that my friend spoke up. My father, who was born with a deformity in his feet and ankles, also suffered from a type of arthritis. His diagnosis was vague, just as mine would be years later. The treatments and medications he was given did little to help eliminate his pain, which was often severe to the point that he couldn't walk. He died many years ago, but what if eliminating nightshades from his diet could have made a difference for him? I'm not a medical professional and I don't have all the answers. I wish it were as simple as taking a pill, but it's not. I only know what I've experienced and what others have shared with me. Caroline's No Nightshade Kitchen: Arthritis Diet is my story with nightshades. It's also my collection of savory recipes. Cooking and dining are opportunities for pleasure, and they should not make you sick.

Caroline Thompson....The Cook. As a former banker, fund-raising executive for foundations, and abstract oil painter, Caroline brings much to the table as she presents a new way to prepare foods that are nightshade free. Her love for creative design infuses her menus which feature foods that delight. However, her menus no longer cause pain for those that are sensitive to nightshade foods. Caroline has honed her cooking skills at workshops around the country. In the late 1990s, she completed an intensive French cooking course at the Cooking School of the Rockies, in Boulder, Colorado. She completed a 12-day workshop at the Institut Paul Bocuse in Lyon, France, in 1997. Cooking remains a joy for Caroline!