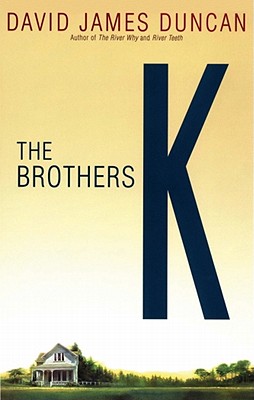 By David James Duncan, Robertson Dean (Read by)
$130.00
Backordered. Place an order and we will let you know when to expect your book.

David James Duncan's first novel, The River Why, met with such enthusiastic praise for its journey of self-discovery that it became a contemporary classic, with readers comparing Duncan to J. D. Salinger, Ken Kesey, and John Irving. In The Brothers K, Duncan amplifies this considerable accomplishment with a tender and powerful story that centers around a Pacific Northwest family in the early 1960s.

The Chance family is wild about baseball and cantankerous about religion. Papa is a gifted but luckless minor-league pitcher whose big-league hopes are fading. Mama is a devout Seventh Day Adventist, constantly in motion to save her wayward sons. When a mill accident crushes Papa's thumb and Mama's inexplicable fanaticism threatens to shred what little the family has in common, parents and children find themselves embattled over the ideals represented by baseball and religion.

It is young Kincaid, the easygoing middle child, who chronicles the humor and spiritual beliefs that alternately sustain and confound this family in a small Washington mill town. And it is through his maturing voice, as his brothers leave town to enter one of the country's most bewildering decades, that we hear the inescapable tensions wrought from one American generation testing another's vulnerabilities. Through the Chances, David James Duncan asks sublime questions about life, self-sacrifice, and enduring love in an ever changing world.