Beating Back the Devil (Paperback) 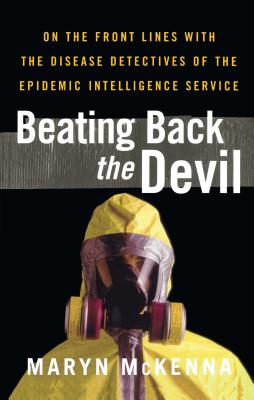 The universal human instinct is to run from an outbreak of disease like Ebola. These doctors run toward it. Their job is to stop epidemics from happening.

They are the disease detective corps of the US Centers for Disease Control and Prevention (CDC), the federal agency that tracks and tries to prevent disease outbreaks and bioterrorist attacks around the world. They are formally called the Epidemic Intelligence Service (EIS)—a group founded more than fifty years ago out of fear that the Korean War might bring the use of biological weapons—and, like intelligence operatives in the traditional sense, they perform their work largely in anonymity. They are not household names, but over the years they were first to confront the outbreaks that became known as hantavirus, Ebola, and AIDS. Every day they work to protect us by hunting down the deadly threats that we forget until they dominate our headlines, West Nile virus, anthrax, and SARS among others.

In this riveting narrative, Maryn McKenna—the only journalist ever given full access to the EIS in its fifty-three-year history—follows the first class of disease detectives to come to the CDC after September 11, the first to confront not just naturally occurring outbreaks but the man-made threat of bioterrorism. They are talented researchers—many with young families—who trade two years of low pay and extremely long hours for the chance to be part of the group that are on the frontlines, in the yellow suits and masks, that has helped eradicate smallpox, push back polio, and solve the first major outbreaks of Legionnaires’ disease, toxic shock syndrome, and E. coli O157 and works to battle every new disease before it becomes an epidemic.

Urgent, exhilarating, and compelling, Beating Back the Devil takes you inside the world of these medical detectives who are trying to stop the next epidemic—before the epidemics stop us.

Maryn McKenna is an award-winning science and medical writer and author of Beating Back the Devil: On the Front Lines with the Disease Detectives of the Epidemic Intelligence Service (named one of the top 10 science books of 2004 by Amazon). She currently works as a contributing writer for the Center for Infectious Disease Research and Policy at the University of Minnesota and is a media fellow at the Henry J. Kaiser Family Foundation. She is a graduate of Georgetown University and the Medill School of Journalism at Northwestern University, and has also studied at Harvard Medical School. She lives in Minneapolis.

"Even people who think they know about the CDC and its elite corps of physicians, the Epidemic Intelligence Service, will be surprised by Beating Back the Devil, a rare inside account of how EIS works in an age of terrorist threat. McKenna hopscotches the globe -- from a malaria outbreak in Malawi to SARS in Vietnam -- to bring to life some of the most compelling mysteries confronted by these fearless disease detectives."

"In the tradition of Laurie Garrett and Richard Preston, medical journalist Maryn McKenna tells the fascinating story of some of the most intrepid medical detectives at work today: the Centers for Disease Control's Epidemic Intelligence Service. Beating Back the Devil is both an accessible and detailed account of how these microbe hunters survey, contain, and combat deadly germs in the twenty-first century. It's also a great read."

"In her enthralling first book, Maryn McKenna takes us inside the unexplored world of the Epidemic Intelligence Service, a vital but rarely discussed part of our national public health service. Without McKenna's thorough research and lively narrative, who would have known of the crusading role the EIS has played since the 1950s in solving our most perplexing medical mysteries? In a new world of bioterror threats and harrowing viruses, McKenna's book is a must-read for anyone concerned about the daunting medical challenges of the future."

-Marilyn W. Thompson, author of The Killer Strain: Anthrax and a Government Exposed