The Interrogation: A Novel (Paperback) 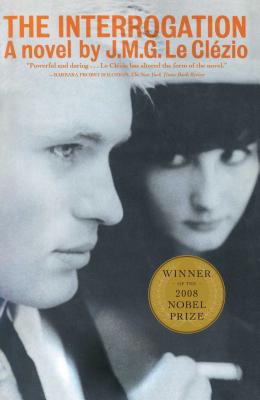 From the original Atheneum edition jacket, 1964.

"J.M.G. Le Clézio, revelation of the literary year" ran the headline of the Paris Express after last year's prizes had been awarded. The Goncourt jury was locked five to five until its president used his double vote to give the prize to the older candidate. Ten minutes later the Renaudot jury elected the candidate they thought they might lose to the other prize. Most of the literary sections ran their prize news putting the Renaudot first, in order to feature the twenty-three-year-old discovery that was rocking Paris literary circles.

What is The Interrogation? Most likely a myth without distinct delineations. A very solitary young man, Adam Pollo, perhaps the first man, perhaps the last, has a very remarkable interior adventure. He concentrates and he discovers ways of being, ways of seeing. He enters into animals, into a tree.... He has no business, no distractions; he is at the complete disposal of life. All of life, that is, except the society of his own species -- and so the story ends.

"This is the next phase after the 'the new novel,'" wrote the critics. Kafka they said; a direct descendant of Joyce, they said. Beckett they said. Like nothing else, they said. One hundred thousand Frenchmen bought it. They said it was strange and beautiful. Finally the real voice of the young, said the critics. "I like J. D. Salinger," said Mr. Le Clézio, and that was all he said. His remarkable first book will soon be published all over the world and much more will be said.

J.M.G. Le Clézio, winner of the 2008 Nobel Prize in Literature, was born in Nice in 1940 and is one of France’s best-known contemporary writers. He has written more than 40 fiction and nonfiction books, including works for children. His works are translated into 36 languages around the world. He currently divides his time between Albuquerque, New Mexico, Mauritius, and his house on the sea in Brittany, France.

"Mr. Le Clézio has the gift and the power of conviction of the true writer and novelist. If this book is in some measure a psychological experiment, it has been conducted warm rather than cold, and the reader participates in it with all his faculties....You must read this book." -- Robert Kanters, Figaro Littéraire

"Le Clézio has told his story without a single recourse to philosophical, moral or metaphysical jargon; his tone has a tranquility which conveys all the ultimate sense of the profound meaning of life: a tone for poets....Le Clézio. A name to remember." -- Maurice Nadeau, L'Express

"Powerful and daring...Le Clézio has altered the form of the novel." -- Barbara Probst Solomon, The New York Times Book Review

"Author of new departures, poetic adventure and sensual ecstasy, explorer of a humanity beyond and below the reigning civilization." -- Swedish Academy Citation, 2008 Nobel Prize in Literature

"A bewitching storyteller...Exquisitely attuned to nature's quest for balance and humanity's penchant for excess and paradox, Le Clézio writes with high compassion and deep wonder of the boundless strength of the spirit." -- Donna Seaman, Booklist

"Le Clézio's verbal felicity is amazing.... we come away awed by his skill in manipulating language and dazzled by his ability to create with words vividly impressionistic paintings." -- Page Stegner, The New York Times Book Review