Unbearable Lightness: A Story of Loss and Gain (Hardcover) 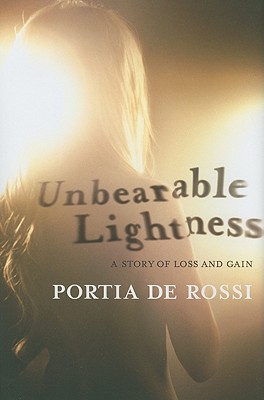 “I didn’t decide to become anorexic. It snuck up on me disguised as a healthy diet, a professional attitude. Being as thin as possible was a way to make the job of being an actress easier . . .”

Portia de Rossi weighed only 82 pounds when she collapsed on the set of the Hollywood film in which she was playing her first leading role. This should have been the culmination of all her years of hard work—first as a child model in Australia, then as a cast member of one of the hottest shows on American television. On the outside she was thin and blond, glamorous and successful. On the inside, she was literally dying.

In this searing, unflinchingly honest book, Portia de Rossi captures the complex emotional truth of what it is like when food, weight, and body image take priority over every other human impulse or action. She recounts the elaborate rituals around eating that came to dominate hours of every day, from keeping her daily calorie intake below 300 to eating precisely measured amounts of food out of specific bowls and only with certain utensils. When this wasn’t enough, she resorted to purging and compulsive physical exercise, driving her body and spirit to the breaking point.

Even as she rose to fame as a cast member of the hit television shows Ally McBeal and Arrested Development, Portia alternately starved herself and binged, all the while terrified that the truth of her sexuality would be exposed in the tabloids. She reveals the heartache and fear that accompany a life lived in the closet, a sense of isolation that was only magnified by her unrelenting desire to be ever thinner. With the storytelling skills of a great novelist and the eye for detail of a poet, Portia makes transparent as never before the behaviors and emotions of someone living with an eating disorder.

From her lowest point, Portia began the painful climb back to a life of health and honesty, falling in love with and eventually marrying Ellen DeGeneres, and emerging as an outspoken and articulate advocate for gay rights and women’s health issues.

In this remarkable and beautifully written work, Portia shines a bright light on a dark subject. A crucial book for all those who might sometimes feel at war with themselves or their bodies, Unbearable Lightness is a story that inspires hope and nourishes the spirit.

Portia de Rossi is an Australian-born actress best known for her roles in the television series Ally McBeal, Arrested Development, and most recently Better Off Ted. She lives in Los Angeles with her wife, Ellen DeGeneres.

“Written with artistry, compelling insight and lucid frankness, [Unbearable Lightness] offers solid hope and inducement to initiate the odyssey toward self-knowledge and acceptance.”

“A stark, well-written portrait of how De Rossi lost control of her life as she became consumed by her struggle for perfection and acceptance.”

“In prose as simply elegant—and as powerful—as a little black dress, De Rossi weaves together three themes—the impact of a loving, but lonely girlhood as the child of a single mother, the corrosive effect of constant doubts about her appearance and the internal struggle over her sexuality.”

“The blunt, pity-free matter-of-factness with which de Rossi shares secrets and lies about her eating disorders and her sexuality makes this forthright confessional story at once shocking and instructional, especially for younger women who may be secretly suffering on their own.”

“De Rossi artfully draws the reader into the tension of a life lived in secrecy...her story is a cautionary tale, an inspiration, and a triumph.”

“An unflinching self-portrait...frank, brave, and revelatory.”

“De Rossi tells her story with genuine insight and unflinching honesty. You will cheer her on.”

“De Rossi’s memoir reminds us that fame and celebrity are no substitute for feeling comfortable in one’s own skin.”