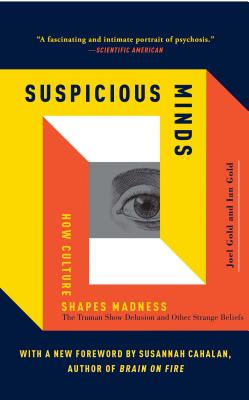 A “clear, witty, and engaging” (The Boston Globe) journey through the brain that connects neuroscience, biology, and culture. An “intellectual landmark” (Edward Shorter, Literary Review of Canada).

The current view of delusions—the strange beliefs held by people with schizophrenia and other psychiatric illnesses—is that they are the result of biology gone awry, of neurons in the brain misfiring. In Suspicious Minds, Dr. Joel Gold and his brother Ian Gold argue that delusions are the result of the interaction between the brain and the social world. They present “a dual broadside: against a psychiatric profession that has become infatuated with neuroscience as part of its longstanding attempt to establish itself as ‘real medicine,’ and against a culture that has become too networked for its own good” (The New York Times). The book “amounts to nothing less than a frontal—or perhaps pre-frontal—challenge to the dominant view of modern psychiatry, which looks to neuroscience to explain disorders of the mind” (The Washington Post).

In “a droll Oliver Sacksian tone” (The Village Voice), the Golds reveal intriguing case studies: the man who was dead and in hell, the woman who could raise the dead at Ground Zero, the man who killed God, and the people who believed they were like the characters in the film The Truman Show. These “page-turning case studies” (New Republic) of delusion “offer a fascinating and intimate portrait of psychosis” (Scientific American). “They provide more proof that no fantasist can hope to match the wonders—and horrors—of the human mind” (The Washington Post).

Joel Gold, MD, is Clinical Associate Professor of Psychiatry at the New York University School of Medicine. He is in private practice in Manhattan.

Ian Gold, PhD, is Associate Professor of Philosophy and Psychiatry at McGill University.

“This remarkable book isn’t just a crash course in delusions, which would be interesting enough. It’s a history of psychiatry, a thriller, an expose of dubious brain science, a collection of fascinating and heartbreaking mini-biographies, and a warning about the fragmentation of modern life.”
— A.J. Jacobs, New York Times bestselling author of The Year of Living Biblically

"A compulsively readable and unexpectedly entertaining book that stands as a needed corrective to a purely biological explanation for mental illness. By emphasizing the cultural vector for madness, the Gold brothers reveal their compassionate understanding of both the sick and the sane—and the surprisingly porous border between those two states."
— John Colapinto, author of As Nature Made Him and a staff writer at The New Yorker

“A powerful and engaging examination of how insanity is molded by culture. Pithy, insightful, and engrossing.”
— Danielle Ofri, MD, PhD, author of What Doctors Feel: How Emotions Affect the Practice of Medicine

"An excellent portrayal of delusions and madness, well written, well researched and exciting to read. Written by experts in the field, I highly recommend this book to all those who want a deeper understanding of the mind and how it works."
— Benjamin Sadock, MD, Menas S Gregory Professor of Psychiatry, NYU School of Medicine

"A provocative new perspective on the diagnosis, and therefore treatment, of mental illness."
— Kirkus Reviews

"Evidently, [the Gold brothers] hypothesize in a droll Oliver Sacksian tone, culture has a great deal of influence on trends in madness."
— The Village Voice