The Journal of Best Practices: A Memoir of Marriage, Asperger Syndrome, and One Man's Quest to Be a Better Husband (Paperback) 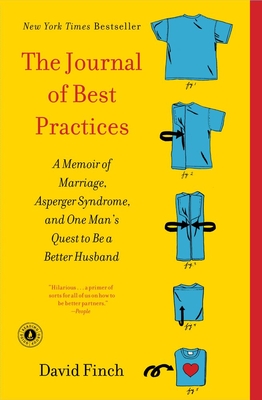 “After five years of a struggling marriage, Finch's wife, Kris, made a breakthrough guess - her husband had Asperger syndrome. The Journal of Best Practices is David Finch's well-documented attempt to go beyond his previous efforts at fitting in and to actually learn to do things like listen, empathize, and 'go with the flow.' Finch still doesn't like flying in a plane or unsolicited wetness, but the results of his determination are not just meaningful to his family, but also an enlightening, endearing, and amusing chronicle for the rest of us.”
— Daniel Goldin, Boswell Book Company, Milwaukee, WI

*A New York Times Bestseller*
A warm and hilarious memoir by a man diagnosed with Asperger syndrome who sets out to save his relationship.

Five years after David Finch married Kristen, the love of his life, they learned that he has Asperger syndrome. The diagnosis explained David’s ever-growing list of quirks and compulsions, but it didn’t make him any easier to live with.

Determined to change, David set out to understand Asperger syndrome and learn to be a better husband with an endearing zeal. His methods for improving his marriage involve excessive note-taking, performance reviews, and most of all, the Journal of Best Practices: a collection of hundreds of maxims and hard-won epiphanies, including “Don’t change the radio station when she’s singing along” and “Apologies do not count when you shout them.” David transforms himself from the world’s most trying husband to the husband who tries the hardest. He becomes the husband he’d always meant to be.

Filled with humor and wisdom, The Journal of Best Practices is a candid story of ruthless self-improvement, a unique window into living with an autism spectrum condition, and proof that a true heart is the key to happy marriage.

David Finch grew up on a farm in northern Illinois and attended the University of Miami, where he studied Music Engineering Technology. In 2008 he was diagnosed with Asperger’s syndrome. His essay, “Somewhere Inside, a Path to Empathy” appeared in The New York Times and became the basis for this book. David lives in northern Illinois with his wife Kristen and two children and is still a total nerd.

“In relating his story, Finch is compellingly honest, a trait that works well with his self-deprecating humor. [His] ability to put his experiences on paper will no doubt help more people—and families—understand [Asperger’s disorder]. “

“In this funny, endearing, lesson-packed memoir, Finch shows what a couple

can accomplish with acceptance, forbearance, determination and love.”

“As a science writer who’s written about the psychology of love and affection, I was struck by the clarity and honesty that illuminate this work. Finch provides a clear and unflinching look at the ways that this disorder leaves a person struggling to navigate through the complexities of our “neurotypical” social world. But he tells his story with humor, affection for others, and without self-pity. In his deep desire to be a good husband, a better father, a decent human being who connects with and care for others, Finch tells a universal tale, a fulfilling and even inspiring story of the difference that love – genuinely giving love - can make in our daily lives.”