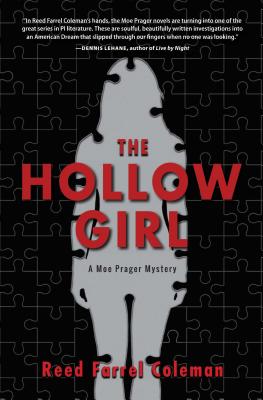 The final novel in one of the most critically acclaimed PI series in the annals of crime fiction!

"Few writers working in any genre offer tales with such moral complexity, dark humor, and, most of all, heart." --Megan Abbott, author of Dare Me

Drunk, alone, and racked with guilt over the tragic death of his girlfriend Pam, Moe Prager is destined for oblivion. But destiny takes a detour when a shadowy figure from Moe's past reappears to beg for Moe's help in locating her missing daughter. As a reluctant, distracted Moe delves into the case, he discovers that nothing is as it seems and no one involved is quite who or what they appear to be. This is especially true of the missing daughter, an early internet sensation known ironically as the Lost Girl or the Hollow Girl. The case itself is hollow, as Moe finds little proof that anyone is actually missing.

Things take a bizarre twist as Moe stumbles across a body in a trendy Manhattan apartment and the Hollow Girl suddenly re-emerges on video screens everywhere. It's a wild ride through the funhouse as Moe tries to piece together a case from the half-truths and lies told to him by a fool's parade of family members, washed-up showbiz types, uncaring cops, a doorman, and a lovesick PI. Even as the ticking clock gets louder, Moe is unsure if it's all a big hoax or if someone's life is really at stake. The question isn't whether or not Moe can find the Hollow Girl, but whether the Hollow Girl was ever there at all.

"This is Moe's final hunt, and he's going to leave behind a slew of grieving fans, but his story is wrapped up perfectly here, filled with raw social commentary, nostalgia, and guarded hopefulness. Expect those attracted to The Hollow Girl by the reality entertainment elements to be hooked by Coleman's airtight writing in this literary heavyweight PI series." --Booklist, Starred Review

"It's nice to report that Moe...is poised to escape his past at the end of this one.... Revelations...wind up this atmospheric, bluesy case." --Kirkus Reviews

"The Hollow Girl...the final Moe Prager mystery...is a fitting conclusion to this intelligent, literary series by a fine writer who has made his reputation both as a mystery writer and a poet." --The Associated Press