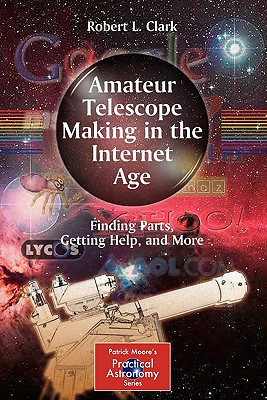 Building an astronomical telescope offers the amateur astronomer an exciting challenge, with the possibility of ending up with a far bigger and better telescope than could have been afforded otherwise. In the past, the starting point has always been the grinding and polishing of at least the primary mirror, a difficult and immensely time-consuming process. But now that the Internet has brought us together in a global village, purchasing off-the-shelf goods such as parabolic mirrors, eyepieces, lenses, and telescope tubes, is possible. There are also a vast number of used mirrors and lenses out there, and it is now possible to track them down almost anywhere in the world. Online stores and auction houses have facilitated commerce regarding all sorts of useful optical components at a reasonable price. This is a book about making telescopes from available parts. It provides guidance on where to look and what to look for in selecting items useful for telescope making and explains how to assemble these components to produce an excellent instrument on a tight budget. At one time, many amateurs made their own telescopes from home-made parts. In today's rushed world, that has almost become a lost art. The Internet offers a wonderful alternative to either buying a pricey scope fully assembled or making your own from scratch.

Although Clark was born in New Hampshire, he spent his early teen years in the New York City area. There he became acquainted with the Theodore Roosevelt Museum of Natural History and at the associated Hayden Planetarium, operated, at that time, by Newton and Margaret Mayhall. Their book Skyshooting provided his first introduction to the idea that someone with only moderate skills can build good scientific instruments. The three volumes of Amateur Telescope Making, edited by Albert G. Ingalls, completed the process of addiction. Clark received a B.S. degree in Mathematics from Stanford University. He then served in the U.S. Air Force at Strategic Air Command headquarters in Nebraska. After his discharge he did graduate work in Mathematics and Computer Science at the University of Maryland. After a few years spent in the Military Operations Research industry, he migrated to a university teaching position that lasted 33 years at the University of the District of Columbia. Throughout all this time he continued to be enamored by the process of building telescopes and actually built a few as time permitted. Since retirement he has allowed the addiction to occupy a large part of his enthusiasm, as is made evident by Figure 2.3. Clark now resides in Westminster, Maryland, where he has built a hilltop observatory and is active with the Westminster Astronomical Society.