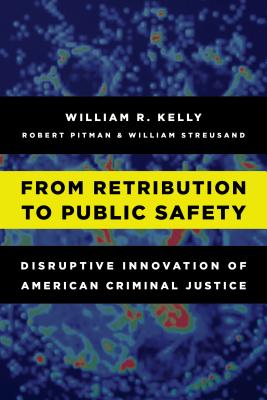 By William R. Kelly, Robert Pitman (With), William Streusand (With)
$40.00
On Our Shelves Now

Over the past fifty years, American criminal justice policy has had a nearly singular focus - the relentless pursuit of punishment. Punishment is intuitive, proactive, logical, and simple. But the problem is that despite all of the appeal, logic, and common sense, punishment doesn't work. The majority of crimes committed in the United States are by people who have been through the criminal justice system before, many on multiple occasions. There are two issues that are the primary focus of this book. The first is developing a better approach than simple punishment to actually address crime-related circumstances, deficits and disorders, in order to change offender behavior, reduce recidivism, victimization and cost. And the second issue is how do we do a better job of determining who should be diverted and who should be criminally prosecuted. From Retribution to Public Safety develops a strategy for informed decision making regarding criminal prosecution and diversion. The authors develop procedures for panels of clinical experts to provide prosecutors with recommendations about diversion and intervention. This requires a substantial shift in criminal procedure as well as major reform to the public health system, both of which are discussed in detail. Rather than ask how much punishment is necessary the authors look at how we can best reduce recidivism. In doing so they develop a roadmap to fix a fundamentally flawed system that is wasting massive amounts of public resources to not reducing crime or recidivism.

William R. Kelly, PhD, is a professor in the Department of Sociology and director of the Center for Criminology and Criminal Justice Research at the University of Texas at Austin, Texas. Kelly is the author of several books and articles on criminal justice, law, and policy, including The Future of Crime and Punishment: Smart Policies for Reducing Crime and Saving Money (Rowman & Littlefield, 2016), Criminal Justice At The Crossroads: Transforming Crime and Punishment (2015) and Justice Under Pressure: Prison Crowding, Parole Release and Recidivism in Texas (1993). Robert Pitman, JD, M.St.(Oxon) was appointed in 2014 by President Obama and confirmed by the United States Senate to serve as a federal District Court Judge for the Western District of Texas. In 2011, Pitman was appointed by President Obama and confirmed by the Senate to be the United States attorney for the Western District of Texas. While he was the U.S. Attorney, he was appointed to the U.S. Attorney General's Advisory Committee, Prior to that he served as the interim United States Attorney for the Western District of Texas. He also served as the Deputy United States Attorney and as a U.S. Magistrate Judge in the Western District of Texas. While serving in the U.S. Attorney's office and on the bench, Pitman was an Adjunct Professor of Law at the University of Texas, and taught courses in the law school and in the undergraduate Plan II honors program. William Streusand, M.D., has lectured extensively throughout the United States and has held a variety of teaching positions and received numerous honors. These include: Chief Fellow in child psychiatry at Baylor College of Medicine and Texas Children's Hospital; Clinical Assistant Professor of Psychiatry at Baylor College of Medicine; Clinical Assistant Professor, Department of Psychiatry and Behavioral Sciences UTMB; Adjunct Professor, University of Texas at Austin, Department of Educational Psychology; Assistant Professor of Psychiatry, UT-Southwestern at Austin; American College of Psychiatrists; and the American Board of Psychiatry and Neurology. Dr. Streusand currently is in private practice.