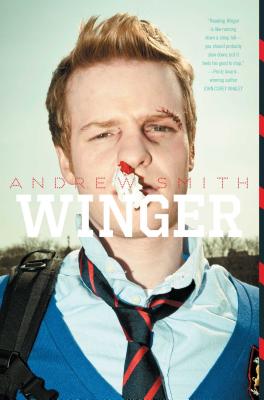 "Pulling absolutely no punches, Andrew Smith gives us Ryan Dean, a.k.a. Winger, in all his glorious imperfection—a 14-year-old smartypants in the 11th grade; rugby player; rule breaker (sort of ); who’s hopelessly in love with Anne, his 16-year-old best friend. Careening between triumph and serious tragedy, this boarding house novel gives us an uproariously ribald, unflinchingly raw, and surprisingly deep take on friendship, love, and growing up."

A teen at boarding school grapples with life, love, and rugby in this unforgettable novel that is “alternately hilarious and painful, awkward and enlightening” (Publishers Weekly, starred review).

Ryan Dean West is a fourteen-year-old junior at a boarding school for rich kids. He’s living in Opportunity Hall, the dorm for troublemakers, and rooming with the biggest bully on the rugby team. And he’s madly in love with his best friend Annie, who thinks of him as a little boy.

Ryan Dean manages to survive life’s complications with the help of his sense of humor, rugby buddies, and his penchant for doodling comics. But when the unthinkable happens, he has to figure out how to hold on to what’s important, even when it feels like everything has fallen apart.

Filled with hand-drawn infographics and illustrations and told in a pitch-perfect voice, this realistic depiction of a teen’s experience strikes an exceptional balance of hilarious and heartbreaking.

"Winger broke my heart, like any great book should. Andrew Smith is a brave and talented storyteller who blows me away every time. Readers will love Ryan Dean West. This book is powerful, sweet and heart-wrenching."
— A. S. King, Printz Honor-winning author of Please Excuse Vera Dietz

"Winger is one of the most honest and beautifully raw novels I've read in a long time. Ryan Dean is a true original."
— Matt de la Peña, author of Mexican WhiteBoy and We Were Here

"Andrew Smith crafts something in Winger that will have you thinking about the things you choose to say and those you leave unsaid."
— TeenReads

"A reader looking to pigeonhole Winger into a traditional genre category may be in for a surprise. It’s a laugh-out-loud funny sports story set at a boarding school, but it’s also a serious look at the many different forms of love—and a subtle meta-narrative about the process of telling a story...Reminiscent of Looking for Alaska, Winger packs a punch that will leave readers rethinking their assumptions about humor, friendship and the nature of storytelling—and about the broad range of emotions of which teenage boys are capable."
— BookPage

"You're not going to find futuristic fantasies or superpowers in Andrew Smith's young adult novel Winger. Fourteen-year-old Ryan Dean West's life at a boarding school for the wealthy is by all accounts ordinary -- he has an unrequited crush on his female best friend, and he has to share a room with his rugby team's biggest bully -- but that's also Winger''s appeal.
— CNN.com, What to Read This Summer: Top 20 Picks

“I am seriously moved beyond words after finishing this beautiful, hilarious, and heart-exploding book. Reading Winger is like running down a steep hill--you should probably slow down, but it feels too good to stop. Andrew Smith has written a wildly original, hilarious, and heartbreaking ode to teenage confusion and frustration. You'll devour it and then go back for more."
— John Corey Whaley, author of the Printz and Morris winning Where Things Come Back