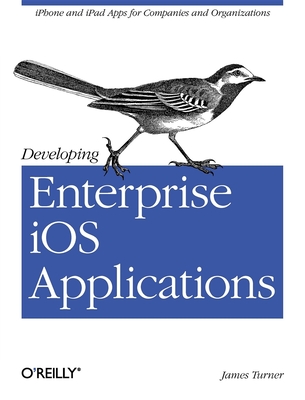 If you plan to develop iOS applications in a corporate setting--for internal consumption or for sale to end users--you need to read this book. Veteran developer James Turner shares best practices and lessons learned from his recent on-the-ground experience planning, building, and shipping an iOS application in an enterprise environment.

With lots of examples and solid advice, you'll learn how to use Xcode, Objective-C, and other Apple development tools within the confines of enterprise software methodologies. Don't be deterred by Apple's development philosophy. If you're familiar with Xcode, this guide will help you build and launch enterprise iOS apps successfully.

James Turner is a freelance journalist and developer who has most recently spent more than a year developing an enterprise iOS application for a major software ISV. He is a contributing editor for oreilly.com, and has written for publications as diverse as the Christian Science Monitor, Processor, Linuxworld Magazine, Developer.com and WIRED Magazine. In addition to his shorter writing, he has also written two books on Java Web Development (MySQL & JSP Web Applications and Struts: Kick Start). He is the former Senior Editor of LinuxWorld Magazine and Senior Contributing Editor for Linux Today. He has also spent more than 25 years as a software engineer and system administrator, and currently works as a Senior Software Engineer for a company in the Boston area. His past employers have included the MIT Artificial Intelligence Laboratory, Xerox AI Systems, Solbourne Computer, Interleaf, the Christian Science Monitor and contracting positions at BBN and Fidelity Investments. He is a committer on the Apache Jakarta Struts project and served as the Struts 1.1B3 release manager. He lives in a 200 year old Colonial farmhouse in Derry, NH along with his wife and son. He is an open water diver and instrument-rated private pilot, as well as an avid science fiction fan.