Invisible and Voiceless: The Struggle of Mexican Americans for Recognition, Justice, and Equality (Paperback) 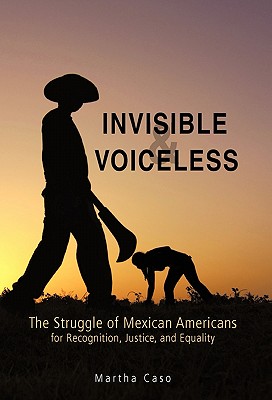 "INVISIBLE & VOICELESS: The Struggle of Mexican Americans for Recognition, Justice, and Equality" traces the vicious history of the European conquest of the Americas and examines its pervasive impact on Mexican Americans and Mexican immigrants today. Author Martha Caso sheds light on events often ignored or glossed over by history textbooks, from the holocaust and enslavement of native peoples at the hands of European conquerors to the Mexican-American War of 1848 to modern efforts by extremists to fan the flames of racism and xenophobia.

The reverberations of the European invasion still echo today, and it is impossible to understand the current issues of poverty and racism without understanding their origins. Historically, Mexican Americans have wielded very little social and political power, and recent xenophobic laws only serve to stoke the fires of hatred and antagonism and further erode their rights. "INVISIBLE & VOICELESS" offers Mexican Americans an opportunity to learn more about their history and their relationship with the United States and Mexico.

Caso's hope is that once they understand their past, Mexican Americans will find their collective voice and stand up for their rights-that they will cease to be invisible and voiceless in America.