For the Love of Physics: From the End of the Rainbow to the Edge of Time - A Journey Through the Wonders of Physics (Paperback) 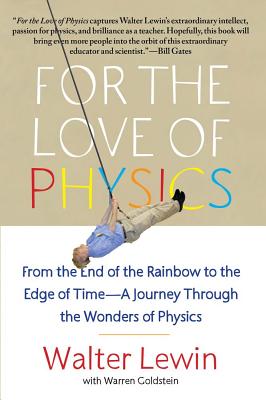 In For the Love of Physics, beloved MIT professor Walter Lewin, whose riveting physics lectures made him a YouTube super-star, takes readers on a remarkably fun, inventive, and often wacky journey that brings the joys of physics to life.

“For the Love of Physics captures Walter Lewin’s extraordinary intellect, passion for physics, and brilliance as a teacher”—Bill Gates.

For more than thirty years as a renowned professor at the Massachusetts Institute of Technology, Lewin’s lectures made physics not only accessible but fun, whether putting his head in the path of a wrecking ball, supercharging himself with three hundred thousand volts of electricity, or demonstrating why the sky is blue and clouds are white. In For the Love of Physics, Lewin takes readers on a marvelous journey, opening our eyes as never before to the wonders of physics and its amazing ability to reveal the beauty and power embedded in our world.

Could it be true that we are shorter standing up than lying down? Why can we snorkel no deeper than about one foot below the surface? Why are the colors of a rainbow always in the same order, can we stretch a hand out and touch one?

Using superbly clear and simple explanations of phenomena we’ve always wondered about, such as what the big bang would have sounded like had anyone existed to hear it, Lewin surprises and delights with physics-based answers to even the most elusive questions.

Whether showing us that a flea is strong enough to pull a heavy book across a table, or describing the coolest, weirdest facts about the tiniest bits of matter, Lewin always entertains as he edifies. “For me,” Lewin writes, “physics is a way of seeing—the spectacular and the mundane, the immense and the minute—as a beautiful, thrillingly interwoven whole.” For the Love of Physics is a rare gem that will change the way readers see the world.

Walter Lewin taught the three core classes in physics at MIT for more than thirty years and made major discoveries in the area of X-ray astronomy. His physics lectures have been the subject of great acclaim, including a 60 Minutes feature, stories in the New York Times, Washington Post, Boston Globe, Newsweek and US News and World Report. They have also been top draws on YouTube and iTunes University. He was awarded three prizes for excellence in undergraduate teaching. He has published more than 450 scientific articles, and his honors and awards include the NASA Award for Exceptional Scientific Achievement, the Alexander von Humboldt Award, and a Guggenheim Fellowship. He became a corresponding member of the Royal Netherlands Academy of Arts and Sciences and Fellow of the American Physical Society in 1993. He lives in Cambridge, Massachusetts.

Warren Goldstein is a professor of history and chair of the History Department at the University of Hartford. A prizewinning historian, essayist, and journalist, he has had a lifelong fascination with physics. His writing has appeared in the New York Times, Washington Post, Boston Globe, Chicago Tribune and many other national periodicals. His prior books include Playing for Keeps: A History of Early Baseball and William Sloane Coffin, Jr.: A Holy Impatience.