The Girls of Atomic City: The Untold Story of the Women Who Helped Win World War II (Paperback) 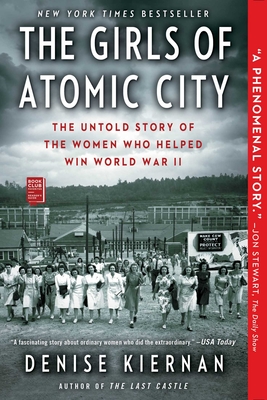 “The best kind of nonfiction: marvelously reported, fluidly written, and a remarkable story...As meticulous and brilliant as it is compulsively readable.” —Karen Abbott, author of Sin in the Second City

At the height of World War II, Oak Ridge, Tennessee, was home to 75,000 residents, and consumed more electricity than New York City, yet it was shrouded in such secrecy that it did not appear on any map. Thousands of civilians, many of them young women from small towns across the U.S., were recruited to this secret city, enticed by the promise of solid wages and war-ending work. What were they actually doing there? Very few knew. The purpose of this mysterious government project was kept a secret from the outside world and from the majority of the residents themselves. Some wondered why, despite the constant work and round-the-clock activity in this makeshift town, did no tangible product of any kind ever seem to leave its guarded gates? The women who kept this town running would find out at the end of the war, when Oak Ridge’s secret was revealed and changed the world forever.

Drawing from the voices and experiences of the women who lived and worked in Oak Ridge, The Girls of Atomic City rescues a remarkable, forgotten chapter of World War II from obscurity. Denise Kiernan captures the spirit of the times through these women: their pluck, their desire to contribute, and their enduring courage. “A phenomenal story,” and Publishers Weekly called it an “intimate and revealing glimpse into one of the most important scientific developments in history.”

“Kiernan has amassed a deep reservoir of intimate details of what life was like for women living in the secret city...Rosie, it turns out, did much more than drive rivets.” —The Washington Post

Denise Kiernan is the author of The New York Times and The Wall Street Journal bestseller The Last Castle. Her previous book, The Girls of Atomic City, is a New York Times, Los Angeles Times, and NPR bestseller. Kiernan has been published in The New York Times, The Wall Street Journal, The Village Voice, Ms., Reader’s Digest, Discover, and many more publications. She has also worked in television, serving as head writer for ABC’s Who Wants to Be a Millionaire during its Emmy award–winning first season and producing for media outlets such as ESPN and MSNBC. She has been a featured guest on NPR’s “Weekend Edition,” PBS NewsHour, MSNBC’s Morning Joe, and The Daily Show with Jon Stewart.

“I love these kinds of books, and this is a great one....It’s a phenomenal story.”
— Jon Stewart, The Daily Show

“Fascinating ... Kiernan has amassed a deep reservoir of intimate details of what life was like for women living in the secret city, gleaned from seven years of interviews and research. ... Rosie, it turns out, did much more than drive rivets.”
— The Washington Post

“Kiernan…brings a unique and personal perspective to this key part of American history.…Instead of the words of top scientists and government officials, Kiernan recounts the experiences of factory workers, secretaries, and low-level chemists in a town that housed at its peak 75,000 people trained not to talk about what they knew or what they did. She combines their stories with detailed reporting that provides a clear and compelling picture of this fascinating time.”
— The Boston Globe

“Kiernan’s focus is on the intimate and often strange details of work and life at Oak Ridge. It’s told in a novelistic style and is an intimate look at the experiences of the young women who worked at Oak Ridge and the local residents whose lives were changed by the presence of the project.”
— The San Francisco Book Review

“Kiernan’s book, the result of seven years of research and interviews with the surviving 'girls,' sparkles with their bright, WWII slang and spirit, and takes readers behind the scenes into the hive-like encampments and cubicles where they spent their days and nights.…The Girls of Atomic City brings to light a forgotten chapter in our history that combines a vivid, novelistic story with often troubling science.”
— Atlanta Journal-Constitution

“The image of Rosie the Riveter — women filling in at factories to help the war effort — is well known. But women also assisted on the Manhattan Project, signing up for secret work in Oak Ridge, Tenn., to help build the atomic bomb. Kiernan looks at the lives and contributions of these unsung women who worked in jobs from secretaries to chemists.”
— New York Post

"As most of us are all too aware, the generation who fought in World War II or supported the effort from home are leaving us -- their children, grandchildren, and greats -- to carry on without them. Thanks to author Kiernan, we hear from a group of that generation's women, now in their eighties and nineties, whose wartime experience matched no one else's. Ever. Anywhere."
— Seattle Post-Intelligencer

“A fresh take on the secret city built in the mountains of Tennessee as part of the Manhattan Project during World War II… An inspiring account of how people can respond with their best when called upon.”
— Kirkus Reviews

"Denise Kiernan recreates, with cinematic vividness and clarity, the surreal Orwell-meets-Margaret Atwood environment of Oak Ridge as experienced by some of the women who were there: secretaries, technicians, a nurse, a statistician, a leak pipe inspector, a chemist, and a janitor."
— DailyBeast.com

“Kiernan snugly fits original research into the creation story of Oak Ridge and should engage readers interested in both women’s history and the background of the atomic bomb.”
— Booklist

“This intimate and revealing glimpse into one of the most important scientific developments in history will appeal to a broad audience.”
— Publishers Weekly

"A lively story about the tens of thousands of women who made the bomb -- from the power-plant janitor struggling each day through the mud to the exiled physicist in Sweden -- The Girls of Atomic City offers a bottom-up history revealing that the atomic bomb was not simply the product of J. Robert Oppenheimer's genius, but also of the work of women at every level of education and class."
— BrainPickings.org

“The Girls of Atomic City is the best kind of nonfiction: marvelously reported, fluidly written, and a remarkable story about a remarkable group of women who performed clandestine and vital work during World War II. Denise Kiernan recreates this forgotten chapter in American history in a work as meticulous and brilliant as it is compulsively readable.”
— Karen Abbott, author of Sin in the Second City

"Kiernan has contributed a new and vital chapter to studies of American political development and women and politics."
— American Political Science Association