A Universe from Nothing: Why There Is Something Rather than Nothing (Paperback) 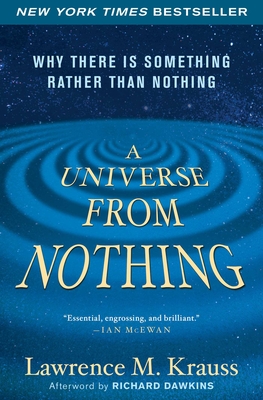 Bestselling author and acclaimed physicist Lawrence Krauss offers a paradigm-shifting view of how everything that exists came to be in the first place.

“Where did the universe come from? What was there before it? What will the future bring? And finally, why is there something rather than nothing?”

One of the few prominent scientists today to have crossed the chasm between science and popular culture, Krauss describes the staggeringly beautiful experimental observations and mind-bending new theories that demonstrate not only can something arise from nothing, something will always arise from nothing. With a new preface about the significance of the discovery of the Higgs particle, A Universe from Nothing uses Krauss’s characteristic wry humor and wonderfully clear explanations to take us back to the beginning of the beginning, presenting the most recent evidence for how our universe evolved—and the implications for how it’s going to end.

Provocative, challenging, and delightfully readable, this is a game-changing look at the most basic underpinning of existence and a powerful antidote to outmoded philosophical, religious, and scientific thinking.

Lawrence Krauss, a renowned theoretical physicist, is the president of The Origins Project Foundation and host of the Origins Podcast. He is the author of more than 300 scientific publications and nine books—including the bestselling The Physics of Star Trek—and the recipient of numerous international awards for his research and writing. Hailed by Scientific American as a “rare scientific public intellectual,” he is also a regular columnist for newspapers and magazines and appears frequently on radio and television.

Richard Dawkins is a Fellow of the Royal Society and was the inaugural holder of the Charles Simonyi Chair of Public Understanding of Science at Oxford University. He is the acclaimed author of many books including The Selfish Gene, Climbing Mount Improbable, Unweaving the Rainbow, The Ancestor’s Tale, The God Delusion, and The Greatest Show on Earth. Visit him at RichardDawkins.net.

"In A Universe from Nothing, Lawrence Krauss has written a thrilling introduction to the current state of cosmology—the branch of science that tells us about the deep past and deeper future of everything. As it turns out, everything has a lot to do with nothing—and nothing to do with God. This is a brilliant and disarming book."-- Sam Harris, author of The Moral Landscape

"Astronomers at the beginning of the twentieth century were wondering whether there was anything beyond our Milky Way Galaxy. As Lawrence Krauss lucidly explains, astronomers living two trillion years from now, will perhaps be pondering precisely the same question! Beautifully navigating through deep intellectual waters, Krauss presents the most recent ideas on the nature of our cosmos, and of our place within it. A fascinating read."

-- Mario Livio, author of Is God A Mathematician? and The Golden Ratio

"In this clear and crisply written book, Lawrence Krauss outlines the compelling evidence that our complex cosmos has evolved from a hot, dense state and how this progress has emboldened theorists to develop fascinating speculations about how things really began."
-- Martin Rees, author of Our Final Hour

“A series of brilliant insights and astonishing discoveries have rocked the Universe in recent years, and Lawrence Krauss has been in the thick of it. With his characteristic verve, and using many clever devices, he’s made that remarkable story remarkably accessible. The climax is a bold scientific answer to the great question of existence: Why is there something rather than nothing.”

-- Frank Wilczek, Nobel Laureate and Herman Feshbach professor at MIT, author of The Lightness of Being

"With characteristic wit, eloquence and clarity Lawrence Krauss gives a wonderfully illuminating account of how science deals with one of the biggest questions of all: how the universe's existence could arise from nothing. It is a question that philosophy and theology get themselves into muddle over, but that science can offer real answers to, as Krauss's lucid explanation shows. Here is the triumph of physics over metaphysics, reason and enquiry over obfuscation and myth, made plain for all to see: Krauss gives us a treat as well as an education in fascinating style."
--A. C. Grayling, author of The Good Book

"We have been living through a revolution in cosmology as wondrous as that initiated by Copernicus. Here is the essential, engrossing and brilliant guide."

“Nothing is not nothing. Nothing is something. That's how a cosmos can be spawned from the void -- a profound idea conveyed in A Universe From Nothing that unsettles some yet enlightens others. Meanwhile, it's just another day on the job for physicist Lawrence Krauss.”
-- Neil deGrasse Tyson, Astrophysicist, American Museum of Natural History

"Lively and humorous as well as informative… As compelling as it is intriguing.”
— Publishers Weekly

“[An] excellent guide to cutting-edge physics… It is detailed but lucid, thorough but not stodgy… [an] insightful book… Space and time can indeed come from nothing; nothing, as Krauss explains beautifully. …A Universe From Nothing is a great book: readable, informative and topical.”
— New Scientist

"Krauss possesses a rare talent for making the hardest ideas in astrophysics accessible to the layman, due in part to his sly humor… one has to hope that this book won't appeal only to the partisans of the culture wars – it's just too good and interesting for that. Krauss is genuinely in awe of the "wondrously strange" nature of our physical world, and his enthusiasm is infectious.”
— San Francisco Chronicle, Huffington Post, AP

“How physicists came up with the current model of the cosmos is quite a story, and to tell it in his elegant A Universe From Nothing, physicist Lawrence Krauss walks a carefully laid path… It would be easy for this remarkable story to revel in self-congratulation, but Krauss steers it soberly and with grace… His asides on how he views each piece of science and its chances of being right are refreshingly honest…unstable nothingness, as described by Krauss… is also invigorating for the rest of us, because in this nothingness there are many wonderful things to see and understand.”
— Nature

"In A Universe From Nothing, Lawrence Krauss, celebrated physicist, speaker and author, tackles all that plus a whole lot else. In fewer than 200 pages, he delivers a spirited, fast-paced romp through modern cosmology and its strong underpinnings in astronomical observations and particle physics theory.Krauss’s slim volume is bolder in its premise and more ambitious in its scope than most. He makes a persuasive case that the ultimate question of cosmic origin – how something, namely the universe, could arise from nothing – belongs in the realm of science rather than theology or philosophy."
— Globe & Mail

“An eloquent guide to our expanding universe… There have been a number of fine cosmology books published recently but few have gone so far, and none so eloquently, in exploring why it is unnecessary to invoke God to light the blue touchpaper and set the universe in motion.”

"His arguments for the birth of the universe out of nothingness from a physical, rather than theological, beginning not only are logical but celebrate the wonder of our natural universe. Recommended."
— Library Journal

“Krauss possesses a rare talent for making the hardest ideas in astrophysics accessible to the layman, due in part to his sly humor… one has to hope that this book won't appeal only to the partisans of the culture wars – it's just too good and interesting for that. Krauss is genuinely in awe of the "wondrously strange" nature of our physical world, and his enthusiasm is infectious.”
— Associated Press

"With its mind-bending mechanics, Krauss argues, our universe may indeed have appeared from nowhere, rather than at the hands of a divine creator. There's some intellectual heavy lifting here—Einstein is the main character, after all—but the concepts are articulated clearly, and the thrill of discovery is contagious. 'We are like the early terrestrial mapmakers,' Krauss writes, puzzling out what was once solely the province of our imaginations."
— Mother Jones

"The author delivers plenty of jolts in this enthusiastic and lucid but demanding overview of the universe, which includes plenty of mysteries—but its origin isn’t among them. A thoughtful, challenging book."
— Kirkus

"People always say you can't get something from nothing. Thankfully, Lawrence Krauss didn't listen. In fact, something big happens to you during this book about cosmic nothing, and before you can help it, your mind will be expanding as rapidly as the early universe."
— Sam Kean, author of The Disappearing Spoon

"A very interesting read from a foremost physicist of our time."
— Santa Barbara Independent