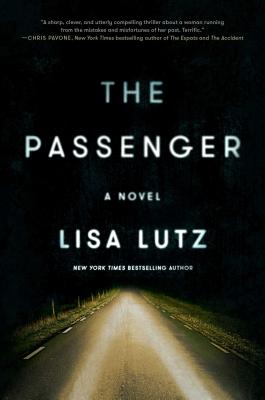 “Thrilling and impossible to put down, this is the sharp, witty, and often sassy story of a woman, variously known as Norah/Jo/Tanya/Amelia/Debra/et al., on the run from events in her past for which she claims innocence. Her only chance of freedom is to run, and while running she changes identities and adds new troubles almost faster than readers can keep track. A meeting with a mysterious woman named Blue puts her on a new path, one that hopefully will lead her home and give her a chance to finally clear her name. Fast-paced and full of unexpected obstacles, this is a roller-coaster ride of a read you don't want to miss.”
— Nancy McFarlane (E), Fiction Addiction, Greenville, SC

From the author of the New York Times bestselling Spellman Files series, Lisa Lutz’s latest blistering thriller is about a woman who creates and sheds new identities as she crisscrosses the country to escape her past: you’ll want to buckle up for the ride!

In case you were wondering, I didn’t do it. I didn’t have anything to do with Frank’s death. I don’t have an alibi, so you’ll have to take my word for it...

Forty-eight hours after leaving her husband’s body at the base of the stairs, Tanya Dubois cashes in her credit cards, dyes her hair brown, demands a new name from a shadowy voice over the phone, and flees town. It’s not the first time.

She meets Blue, a female bartender who recognizes the hunted look in a fugitive’s eyes and offers her a place to stay. With dwindling choices, Tanya-now-Amelia accepts. An uneasy―and dangerous―alliance is born.

It’s almost impossible to live off the grid today, but Amelia-now-Debra and Blue have the courage, the ingenuity, and the desperation, to try. Hopscotching from city to city, Debra especially is chased by a very dark secret…can she outrun her past?

With heart-stopping escapes and devious deceptions, The Passenger is an amazing psychological thriller about defining yourself while you pursue your path to survival. One thing is certain: the ride will leave you breathless.

Lisa Lutz is the author of the New York Times bestselling, Edgar Award– and Macavity Award–nominated, and Alex Award–winning Spellman Files series, as well as the novels How to Start a Fire, The Passenger, and The Swallows. She lives and works in upstate New York.

“At the outset of The Passenger, Lutz's narrator knows that her only chance for freedom is to lose herself, and thus, leaving one dead man behind, she hits the diamond lane of America—and storytelling—with a carload of identities, including the reader, who is carried along as both passenger and pursuer. This tenacious and resourceful heroine will keep you chasing, rooting, lip-biting, and above all reading until you reach the ending you never saw coming. My advice: buckle up.”
—Tim Johnston, New York Times Bestselling Author of Descent

"A sharp, clever, and utterly compelling thriller about a woman running from the mistakes and misfortunes of her past. Terrific."
—Chris Pavone, New York Times Bestselling author of The Expats and The Accident

"With whip-smart writing and a breakneck pace, The Passenger's clever plot twists and sharp characters are sure to keep you guessing long into the night, hoping against hope that its complex protagonist isn't nearly as guilty as she seems."
—Kim McCreight, New York Times Bestselling author of Reconstructing Amelia

“The kind of suspenseful, character-driven mystery the term “page-turner” was coined for”
—Boston Globe, Best Books of Summer 2016 select

“The Passenger is a maze of plot twists and turns that you won't see coming.”
—Chicago Tribune

“When the answers finally come, they are juicy,complex, and unexpected. The satisfying conclusion will leave readers rethinking everything and immediately turning back to the first page to start again. Psychological suspense lovers will tear through this thriller, a new direction for best seller Lutz (How To Start a Fire). Fans of her beloved ‘Spellman Files’ series will have high expectations, and if they are open to a new genre and a darker energy and intensity, they will find her trademark independent narrator, smart writing, and rapid pace delivered here.”
— Library Journal (starred review)

“Lutz's pacing is excellent, and the interior monologue captures what it would be like not to have a name or, even worse, a valid ID. Lutz provides some great suggestions for going on the lam (a lot of hair dye and car switching is involved), but at its core, this is a novel about identity: a slippery notion which depends upon both how the world sees us and how we see ourselves.”
—Kirkus Reviews

“With The Passenger [Lutz] has re-introduced herself as a more serious—and intriguing—author of crime fiction.”
—Washington Post

“Lisa Lutz is a brilliant writer. You need to read all of her books, but read The Passenger first.”
—The Irish Times

“If your idea of fun involves a dark, twisty noir about a woman on the lam—stealing cars, dying her hair in seedy motel rooms, and constantly changing her name—Lisa Lutz’s The Passenger is the book you need. Lutz’s turn at the road novel raises all kinds of vexing questions about who we are and who we belong to as her heroine tries to evade her shadowy past.”
—LitHub.com