The Boom: How Fracking Ignited the American Energy Revolution and Changed the World (Hardcover) 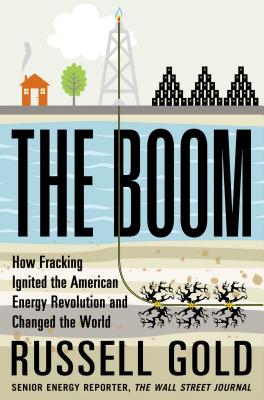 By Russell Gold
Unavailable. Orders will be auto-cancelled.

Russell Gold, a brilliant and dogged investigative reporter at The Wall Street Journal, has spent more than a decade reporting on one of the biggest stories of our time: the spectacular, world-changing rise of “fracking.” Recognized as a finalist for the Pulitzer Prize and a recipient of the Gerald Loeb Award for his work, Gold has traveled along the pipelines and into the hubs of this country’s energy infrastructure; he has visited frack sites from Texas to North Dakota; and he has conducted thousands of interviews with engineers and wildcatters, CEOs and roughnecks, environmentalists and politicians. He has also sifted through reams of engineering reports, lawsuit transcripts, and financial filings. The result is an essential book—a commanding piece of journalism, an astounding study of human ingenuity, and an epic work of storytelling.

Fracking has vociferous critics and fervent defenders, but the debate between these camps has obscured the actual story: Fracking has become a fixture of the American landscape and the global economy. It has upended the business models of energy companies around the globe, and it has started to change geopolitics and global energy markets in profound ways. Gold tells the story of this once-obscure oilfield technology—a story with an incredible cast of tycoons and geologists, dreamers and drillers, speculators and skeptics, a story that answers a critical question of our time: Where will the energy come from to power our world—and what price will we have to pay for it?

Russell Gold has reported on energy regularly in The Wall Street Journal since 2002. His coverage of the Deepwater Horizon oil spill was honored with a Gerald Loeb Award and was a finalist for the Pulitzer Prize. The author of The Boom and Superpower, he lives in Austin, Texas.

"Russell Gold’s The Boom is a double quest. He tells the story of the biggest innovation in energy so far in this century—the shale gas revolution. He captures the personalities, and the drama and surprises, and brings clarity to the debate about the environmental impact—and what it means for the U.S. economy and “energy independence.” But it’s also a more personal story – about “The Farm” in rural Pennsylvania where he spent time as a child, and his quest to understand what is happening in this new age of shale gas."
— Daniel Yergin, author of The Quest: Energy, Security, and the Remaking of the Modern World and of The Prize

“In The Boom, Russell Gold provides a compelling account of the last half century of natural gas technology development. Driven by hunches, large ambitions and even larger personalities, the story of fracking is the story of innovation, American style. Gold delves into the growing conflict between economic development and concerns over environmental damage, and explains why fracking is seen by some as a vital bridge to a sustainable energy future and feared by others as another excuse to postpone addressing the risks of climate change…. The Boom puts a human face on the unfinished story of our struggle to transition to a sustainable world.”
— Steven Chu, Former United States Secretary of Energy

"Gold's book is an early must-read for 2014: it is both a thorough and fascinating examination of the fracking economy and the technological innovations that have made these new riches accessible (including the often catastrophic damage done in the process of obtaining them)."

"An insider’s guide to the most controversial energy-production technique in the United States."

“Gold delivers an engaging and expansive education on the promise and risks involved with the sudden rise of fracking for oil and natural gas in the United States… Gold delivers a balanced analysis weighing the benefits (the reduced use of dirtier coal, an end to the reliance on foreign oil and foreign entanglements, and sudden and reliable abundance of energy supply) against the pitfalls (the impacts on the environment and quality of life as energy companies stampede to secure leases and rush to drill, often in populated areas). Worthy of the attention of both fracking’s boosters and opponents, Gold’s insightful reportage supplies a well-rounded view of a polarizing subject.”

“Whether you think fracking is our salvation or an agent of environmental destruction, The Boom is worth your time.”

"Combining lucid explanations of fracking’s technical aspects with the practice’s more dramatic backstory, Gold’s work is a tour de force of contemporary journalism that will captivate anyone concerned with the future of energy consumption and
our rapidly changing climate.”

“This deftly handled account of the shale revolution provides a sobering assessment of the current limits of alternative energy, making for a nuanced treatment of an issue too many would prefer to see in black and white…Mr. Gold performs a valuable service by looking at it from a historical, economic, political and environmental perspective…his clear, thorough treatment of the subject is the starting point for a more informed discussion of energy and environmental policy.”

“[The Boom] brings new clarity to a subject awash in hype from all sides… a thoughtful, well-written and carefully researched book that provides the best overview yet of the pros and cons of fracking. Gold quietly leads both supporters and critics of drilling to consider other views.”

"Russell Gold's The Boom, authoritative and fairly balanced, is a welcome guide - the best all-around book yet on fracking."

“The Boom marries the muscly prose of a beat reporter with a flair for finding compelling characters and telling anecdotes around this once-obscure oilfield technology.”

“An excellent, fair-minded, engaging book… Gold’s words tell a dramatic and engrossing story. The book is well-informed and well-told: a great job of reporting.”

“Gold brings clarity to a subject awash in hype from all sides. It's a thoughtful, well-written and carefully researched book that provides the best overview yet of the pros and cons of fracking.”

“[A] revelatory and a cautionary tale…illustrates how dramatically America’s energy equation has been rewritten in less than a decade.”