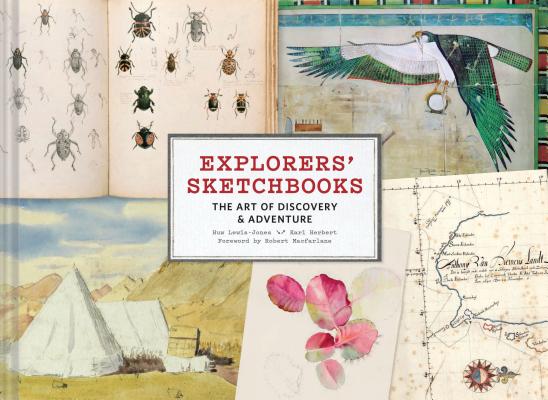 By Huw Lewis-Jones, Kari Herbert
$40.00
On Our Shelves Now

The sketchbook has been the one constant in explorers' kits for centuries of adventure. Often private, they are records of immediate experiences and discoveries, and in their pages we can see what the explorers themselves encountered. This remarkable book showcases 70 such sketchbooks, kept by intrepid men and women as they journeyed perilous and unknown environments—frozen wastelands, high mountains, barren deserts, and dense rainforests—with their senses wide open. Figures such as Charles Darwin and Sir Edmund Hillary are joined here by lesser-known explorers such as Adela Breton, who braved the jungles of Mexico to make a record of Mayan monuments. Here are profiles, expedition details, and the artwork of pioneering explorers and mapmakers, botanists and artists, ecologists and anthropologists, eccentrics and visionaries. Here is the art of discovery.

Huw Lewis-Jones is a historian and author who travels regularly to the Arctic and Antarctica as a polar guide. Kari Herbert has written several books on exploration and is the daughter of polar explorer Sir Wally Herbert. Huw and Kari are married and live by the sea in Cornwall, England.

Robert Macfarlane is a fellow of Emmanuel College, Cambridge, and the author of numerous books about exploration, travel, and landscape.

The Art of Discovery and Adventure, by Lewis-Jones and writer Kari Herbert, daughter of polar explorer Wally Herbert, which contains

illustrated accounts from 60 men and women whose sketches record the delights and dangers of journeys through tundras, deserts,

Top 10 travel books "This magical book celebrates the artwork of explorers, bringing together more than 400 beautiful sketches and paintings produced by 70 explorers from the 16th century to the present. The book is compiled by historian and polar guide Huw Lewis-Jones and writer-photographer Kari Herbert - daughter of the polar explorer Sir Walter "Wally" Herbert - who have had the enviable task of diving into the archives to find work from Captain Scott, Charles Darwin and Abel Tasman, as well as lesser-known explorers, such as Adela Breton, who recorded Mexico's Maya monuments."
-The Guardian (UK)

"This is an outstandingly beautiful book, visually very impressive...The wealth of illustrations is one of the principal joys...A fascinating publication of very high quality that, we are sure, will appeal to a broad range of readers."
-Seaways' Ships in Scale magazine

"Explorers' Sketchbooks: The Art of Discovery and Adventure is a stunningly beautiful book. It was so neat to look at the first written record of places and things that are so very commonplace today. I was amazed by the stunning artwork created in such extreme circumstances as the Artic, deserts, rainforests and the Antarctic-and most without modern equipment! Explorers' Sketchbooks: The Art of Discovery and Adventure offers a peek into a time when the only way to share what you saw with others was to draw it, and explorer's discoveries took months, or even years, to be shared with the public. Their work is beautiful to look at and fascinating to read. As neat as it was to look at the work of familiar explorers, it was also fun to discover lesser known explorers and their discoveries."
-PlanoReads

Starred Review The intersection of adventure, art, and memoir doesn't get any better than this title, edited by polar guides and husband-and-wife team Lewis-Jones (Face to Face) and ­Herbert (Polar Wives). This delicious oversized sampler of illustrated field notes offers alphabetically arranged excerpts from the notebooks of 70 naturalists, ethnographers, scientists, and mountaineers, famous and obscure, from John White's 1585 depictions of Algonquin Indians to Apollo 12 astronaut Alan Bean's paintings of rock collecting on the moon. A brief biography of each person, with highlights from their travels, accompanies high-quality illustrations: not only landscapes and wildlife but also portraits of long-vanished people, architecture, and customs, plus journal ephemera-sure to please sketchbook lovers. Most predate the mid-20th century, so predictably, few women and even fewer nonwhite artists are featured; issues of colonialism and appropriation are touched on, but these are not in-depth studies. Rather, they are tantalizing vignettes of those who took up pencil, paints, and paper to communicate firsthand the wonder of their discoveries."
-Library Journal

A Book of the Year "But for pure unchallenging delight, I most enjoyed an astonishing collection of works of art created by explorers and adventurers down the centuries. It is a beautiful multi-edited sort of album, entitled Explorers' Sketchbooks...If it were not such a sumptuous volume it would be glorious for reading in the bath."
-The Spectator

"This compilation of excerpts and facsimiles of 70 notebooks belonging to explorers throughout history is as educational as it is visually enticing. Readers will lap up John James Audubon's Carolina Parakeet drawn in June of 1811, Charles Darwin's 1837 "tree of life" sketch, and Alexandrine Tinne's self-portraits at a ball in 1855 and in a Bedouin tent a year later, among many other illustrations. However, this collection proves to be as much about words, for the writing is exemplary. The exquisite, informative reproductions are supported by hearty and wistful quotes from the explorers and by the authors' detailed captions... Lewis-Jones and Herbert's introduction and essays by four living explorers, most notably Wade Davis, raise the form high. Brief biographies contribute finely crafted, economical rhetoric as well as well-researched material and sound opinions. This bountiful book provides delicious discovery in itself, albeit from the comfort of a chair by the fire."
-Publishers Weekly

"An inspiration and resource for nature study, history, or geography. Or, just page through the book, pretending to be an explorer from a day gone by."
-GeekDad

"In 'Explorers' Sketchbooks,' a selection of field notes and illustrations of 70 different adventuresome travelers, Huw Lewis-Jones and Kari Herbert introduce us to the more peaceful and positive sides of exploration. The documents they offer capture the sense of wonder and awe that travel has evoked in many souls brave and lucky enough to have visited the world's remotest places...The book's author-editors have done a terrific job in selecting spectacular images and documents to reproduce...Anyone with an interest in travel will find 'Explorers' Sketchbooks' a source of inspiration. Even those well versed in exploration history will discover new information here."
-The Wall Street Journal