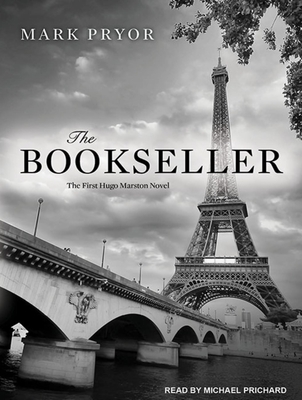 By Mark Pryor, Michael Prichard (Narrated by)
Unavailable. Orders will be auto-cancelled.

This is book number 1 in the Hugo Marston series.

"Another first novel in a new series that you will enjoy.  Hugo Marston, former FBI and now head of security at the US embassy in Paris, witnesses the violent kidnapping of a man who has sold him books; when the police do not act, he calls on an old friend, Tom Green, former CIA spook, to help him in his unofficial investigation.  The intelligent characterization that is created between them makes Marston and Green a team to follow."

Max-an elderly Paris bookstall owner-is abducted at gunpoint. His friend Hugo Marston, head of security at the U.S. embassy, looks on helplessly, powerless to do anything to stop the kidnapper. Marston launches a search, enlisting the help of semiretired CIA agent Tom Green. Their investigation reveals that Max was a Holocaust survivor and later became a Nazi hunter. Is his disappearance somehow tied to his grim history, or even to the mysterious old books he sold? On the streets of Paris, tensions are rising as rival drug gangs engage in violent turf wars. Before long, other booksellers start to disappear, their bodies found floating in the Seine. Though the police are not interested in his opinion, Marston is convinced the hostilities have something to do with the murders of these bouquinistes. Then he himself becomes a target of the unknown assassins. With Tom by his side, Marston finally puts the pieces of the puzzle together, connecting the past with the present and leading the two men, quite literally, to the enemy's lair. Just as the killer intended.

Mark Pyro is an assistant district attorney with the Travis County District Attorney's Office in Austin, Texas, and the author of the true-crime book "As She Lay Sleeping."

Michael Prichard is a professional narrator and stage and film actor who has played several thousand characters during his career. An Audie Award winner, he has recorded well over five hundred books and has earned several "AudioFile" Earphones Awards. Michael was also named a Top Ten Golden Voice by "SmartMoney" magazine.