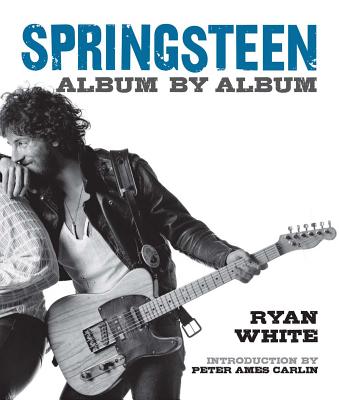 By Ryan White, Peter Ames Carlin (Introduction by)
$19.95
Not available to order.

The definitive illustrated book on "The Boss"--now in an updated paperback edition
Renowned for his passionate songwriting, galvanizing live shows, and political activism, Bruce Springsteen stands astride the rock 'n' roll stage like a colossus--and the iconic rocker shows no signs of slowing down. With in-depth reviews of 18 studio albums spanning over 40 years of music history, Springsteen delves into every aspect of the superstar's career. Richly photographed, and featuring brilliant writing by one of America's top music critics as well as an introduction by Peter Ames Carlin (author of the bestselling biography Bruce), this unofficial retrospective is a must-have for The Boss's millions of fans.

Ryan White is a music critic who has twice been voted one of America's best writers by the Society for Features Journalism. After a decade covering sports for the Oregonian, he became the paper's music writer in 2009, penning his first article on Springsteen's Devils & Dust tour. Highly regarded as one of the most important and influential writers working out of Portland--one of the hottest music cities in the United States--his column has given many successful Pacific Northwest bands their first press exposure. He appears regularly on radio shows including Live Wire! and Oregon Public Broadcasting's Think Out Loud program discussing the week's cultural events. He has written extensively on Bruce Springsteen, most recently covering his 2012 tour. White lives in Portland, OR. Introduction author Peter Ames Carlin is a journalist, critic, and author. He speaks regularly on music, art, and popular culture and has been the senior writer at People magazine and a TV critic for the Oregonian newspaper. An author of several books including Homeward Bound: The Life of Paul Simon (Henry Holt); Paul McCartney: A Life (Touchstone); and Bruce (Touchstone), the bestselling biography of Bruce Springsteen published in 2012. He lives in Portland, OR.