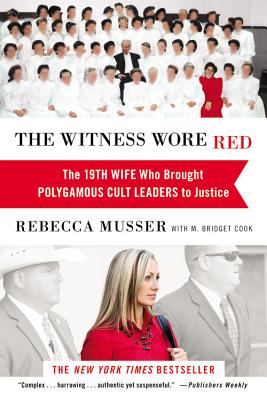 By Rebecca Musser, M. Bridget Cook (With)
$17.00
Backordered. Place an order and we will let you know when to expect your book.

Rebecca Musser grew up in fear, concealing her family's polygamous lifestyle from the "dangerous" outside world. Covered head-to-toe in strict, modest clothing, she received a rigorous education at Alta Academy, the Fundamentalist Church of Jesus Christ of Latter Day Saints' school headed by Warren Jeffs. Always seeking to be an obedient Priesthood girl, in her teens she became the nineteenth wife of her people's prophet: 85-year-old Rulon Jeffs, Warren's father. Finally sickened by the abuse she suffered and saw around her, she pulled off a daring escape and sought to build a new life and family.

The church, however, had a way of pulling her back in-and by 2007, Rebecca had no choice but to take the witness stand against the new prophet of the FLDS in order to protect her little sisters and other young girls from being forced to marry at shockingly young ages. The following year, Rebecca and the rest of the world watched as a team of Texas Rangers raided the Yearning for Zion Ranch, a stronghold of the FLDS. Rebecca's subsequent testimony would reveal the horrific secrets taking place behind closed doors of the temple, sending their leaders to prison for years, and Warren Jeffs for life.

The Witness Wore Red is a gripping account of one woman's struggle to escape the perverse embrace of religious fanaticism and sexual slavery, and a courageous story of hope and transformation.

Rebecca Musser speaks nationally on behalf of oppressed women and is the founder of Claim Red, a non-profit organization. She lives in Idaho with her family.

"The book speaks to the ways isolation, fear and secrecy can shelter insidious abuses until someone has the courage to step forward as a witness."
—Kirkus Reviews