The Most Dangerous Man in America: Timothy Leary, Richard Nixon and the Hunt for the Fugitive King of LSD (Hardcover) 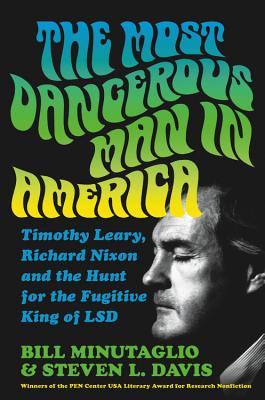 From Bill Minutaglio and Steven L. Davis, authors of the PEN Center USA award-winning Dallas 1963, comes a madcap narrative about Timothy Leary's daring prison escape and run from the law.

On the moonlit evening of September 12, 1970, an ex-Harvard professor with a genius I.Q. studies a twelve-foot high fence topped with barbed wire. A few months earlier, Dr. Timothy Leary, the High Priest of LSD, had been running a gleeful campaign for California governor against Ronald Reagan. Now, Leary is six months into a ten-year prison sentence for the crime of possessing two marijuana cigarettes.

Aided by the radical Weather Underground, Leary's escape from prison is the counterculture's union of "dope and dynamite," aimed at sparking a revolution and overthrowing the government. Inside the Oval Office, President Richard Nixon drinks his way through sleepless nights as he expands the war in Vietnam and plots to unleash the United States government against his ever-expanding list of domestic enemies. Antiwar demonstrators are massing by the tens of thousands; homemade bombs are exploding everywhere; Black Panther leaders are threatening to burn down the White House; and all the while Nixon obsesses over tracking down Timothy Leary, whom he has branded "the most dangerous man in America."

Based on freshly uncovered primary sources and new firsthand interviews, The Most Dangerous Man in America is an American thriller that takes readers along for the gonzo ride of a lifetime. Spanning twenty-eight months, President Nixon's careening, global manhunt for Dr. Timothy Leary winds its way among homegrown radicals, European aristocrats, a Black Panther outpost in Algeria, an international arms dealer, hash-smuggling hippies from the Brotherhood of Eternal Love, and secret agents on four continents, culminating in one of the trippiest journeys through the American counterculture.

Bill Minutaglio is the author of several books, including Dallas 1963, for which he won the PEN Center USA Literary Award for Research Nonfiction with Steven L. Davis. His work has appeared in the New York Times, Washington Post, Newsweek, and Esquire.

Steven L. Davis is the PEN USA-award winning author of four books focusing on iconoclasts, including Dallas 1963 with Bill Minutaglio and J. Frank Dobie: A Liberated Mind. He is the president of the Texas Institute of Letters and a curator at the Wittliff Collections at Texas State University in San Marcos.

"Fascinating...rigorously researched...[THE MOST DANGEROUS MAN IN AMERICA] offers the pleasures of the tick-tock genre. Much like Leary himself, the book is plenty of zany fun."—The New York Times

"One of the decade's most audacious and exciting stories, told with page-turning panache."—The Boston Globe

"...[A] rip-roaring tale of hallucinogenic drugs, revolutionary politics and an intercontinental standoff...Minutaglio and Davis have taken a largely forgotten chapter from the recent past and turned it into a vigorous page-turner."—San Francisco Chronicle

"It's a rollicking tale that brings to life the antic atmosphere of America in the 'Me Decade.'"—Wall Street Journal

"THE MOST DANGEROUS MAN IN AMERICA is a wild ride across time, space, and multiple cosmic planes during an era when America came close to losing -- or finding? -- its mind. Leary and Nixon: surely no other country on earth could have produced such a perfectly, surreally antithetical pair. Crack open this book and prepare to have your mind blown by the reality of this very strange tale."—Ben Fountain, PEN/Hemingway and O. Henry Prize-winning author of Billy Lynn's Long Halftime Walk and Brief Encounters with Che Guevara: Stories

"A pitch-perfect, exhilarating work about one of the strangest chapters in the American experience, one so exciting that even the postscript rivets...A stroke of narrative genius."—Booklist (Starred Review)

"A riveting international chase between a tenacious but paranoid cat and a wily but delusional mouse... Minutaglio and Davis are superb storytellers, and throughout the narrative, they nimbly move between their two converging subjects. Their account is expertly detailed and blessedly fat-free."—Kirkus (Starred Review)

"The glory of [THE MOST DANGEROUS MAN IN AMERICA] is its fast-paced, rollicking narrative that brings the freakishness of the revolutionary 1970s to life. Bill Minutaglio and Steven L. Davis have pulled off a meticulous observation of their subjects with turns of phrases that pop with pleasure. I galloped through the book; could not put it down."—Jan Jarboe Russell, New York Times bestselling author of The Train to Crystal City

"A vivid, eye-opening alternate view of an especially bizarre period of American history...Far too strange to be fiction, the book brilliantly details an American tragedy of two men, each of whom considered the other to be the most dangerous man in America."—p.p1 {margin: 0.0px 0.0px 14.0px 0.0px; font: 14.0px Calibri; color: #1a1a1a; -webkit-text-stroke: #1a1a1a}span.s1 {font-kerning: none}James Fadiman, PhD., microdose researcher and author of The Psychedelic Explorers' Guide: Safe, Therapeutic, and Sacred Journeys

"Bill Minutaglio and Steven L. Davis weave a riveting tale that will keep readers on the edge of their seats."—Bookish

"A deeply researched, entertaining, and informative look at the symbolically joined paths Nixon and one of his nemeses, LSD guru Timothy Leary, followed in the early 1970s, the era that would ultimately be defined by Watergate."—St. Louis Post-Dispatch

"Can you dig it? In their wild new book, authors Bill Minutaglio and Steven L. Davis...have crafted a hopped-up, sometimes risibly over-the-top narrative that...delivers an outlandish concoction of twists, turns and international intrigue."—Newsday

"A vivid evocation of a raucous time in recent American history."—Shelf Awareness