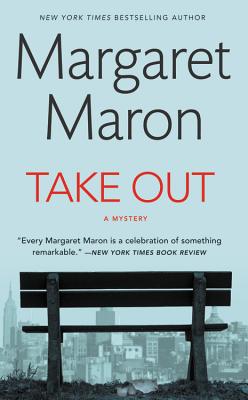 By Margaret Maron
$7.99
It's complicated, and may be unavailable. Place an order and we will contact you with the expected arrival date.

NYPD Detective Sigrid Harald is still reeling from the untimely death of her lover, acclaimed painter Oscar Nauman, when she is called to investigate the poisoning of two homeless men in the West Village. As she examines the mysterious deaths, Sigrid uncovers a grim neighborhood scandal surrounding two influential women: one a haughty mafia widow, the other a retired opera prima donna, both with dark secrets they've kept under wraps for decades. Was the poison really meant for the homeless men, or were they merely unintended victims as the decades-long feud between the two women comes to a head?

And still, Sigrid can't stop wondering what brought her late lover so urgently across the country to the winding mountain road that took his life--until she meets a man who may hold the answers she seeks . . . .

MARGARET MARON grew up in the country near Raleigh, North Carolina, but for many years lived in Brooklyn, New York. When she and her artist husband returned to the farm that had been in her family for a hundred years, she began a series based on her own background. The first book, Bootlegger's Daughter, became a Washington Post bestseller that swept the major mystery awards for its year-winning the Edgar, Agatha, Anthony, and Macavity Awards for Best Novel-and is among the 100 Favorite Mysteries of the Century as selected by the Independent Mystery Booksellers Association. Later Deborah Knott novels Up Jumps the Devil, Storm Track, and Three-Day Town each also won the Agatha Award for Best Novel. Margaret is also the author of the Sigrid Harald series of detective novels. In 2008, Maron received the North Carolina Award for Literature, the highest civilian honor the state bestows on its authors. And in 2013, the Mystery Writers of America celebrated Maron's contributions to the mystery genre by naming her a Grand Master-an honor first bestowed on Agatha Christie. To find out more about her, you can visit MargaretMaron.com.

"Margaret Maron is one of those authors whose devoted fans would follow them anywhere."—The New York Times

"Excellent...If this is indeed Maron's final book, as she has announced, she is quitting while still in top form."—Publishers Weekly (STARRED REVIEW)


"Maron's series finale and last book ends her distinguished writing career on a high note. Her many fans will enjoy this while wiping away tears of farewell."—Library Journal (STARRED REVIEW)

"Every Margaret Maron is a celebration of something remarkable."—New York Times Book Review

"[V]ery satisfying. If we must leave Sigrid Harald, this is the way to do it."—LA Review of Books

"Opening a new Margaret Maron is like unwrapping a Christmas gift."—Cleveland Plain Dealer

"You read a Maron mystery for the rich back stories of her main characters as much as for the whodunit, and she doesn't disappoint here."—The News & Observer

PRAISE FOR MARGARET MARON'S DEBORAH KNOTT SERIES:
"Bestseller Maron's 20th Deborah Knott mystery (after 2014's Designated Daughters) combines strong plotting, a superb cast of recurring characters, and a rare sense of place that transports readers to rural North Carolina. District court judge Deborah and the huge Knott clan headed by Deborah's father, reformed bootlegger Kezzie Knott, become involved in a murder investigation when Kezzie finds Vick Earp bludgeoned to death on the family farm. Vick and his Earp relatives have had an ongoing feud with the Knotts. When Deborah's lawman husband, Dwight Bryant, is appointed lead investigator, the victim's uncle, Joby Earp, is quick to stir up charges of favoritism. Providing counterpoint to the murder case is the backstory of Deborah's mother, Sue Stephenson, and Sue's relationship with the mysterious Capt. Walter Raynesford McIntyre, of the U.S. Army Air Corps, whom she meets in 1943 at a USO club. It all adds up to another sparkling chapter of the Knott family saga."—Publishers Weekly (Starred Review) on Long Upon the Land

"This author knows how to draw you in! The family interaction made me so curious that it was impossible to put down."—Suspense Magazine on Long Upon the Land

"In DESIGNATED DAUGHTERS, practically the whole clan shows up at the hospice where Aunt Rachel has interrupted the process of dying to deliver a rambling account of all the things that have been on her wandering mind. It's quite a lovely deathbed aria, narrated in the honeyed accents of the region. But someone must have feared Aunt Rachel might divulge a buried secret because that someone creeps into her room and smothers her with a pillow.
Maron knows how to adorn a solid murder mystery with plenty of ancillary entertainments. But her broader theme involves the way families flourish when they work together for the common good. While there are charming scenes of group projects like building a pond shed and assembling a bluegrass band, the clan members Maron really cherishes are those who devote themselves to caring for the elders of the family. Living saints they are, every last one of them."
—New York Times Book Review on Designated Daughters

"In MWA Grand Master Maron's outstanding 19th mystery featuring judge Deborah Knott of North Carolina's Colleton County (after 2012's The Buzzard Table), Deborah's elderly aunt, Rachel Morton, lies near death in a hospice. Rachel attracts a crowd of friends and relatives as she talks of "babies, fires, and unpaid debts, of someone who beat his wife and of cowbirds and vegetables and broken jars." A distraction allows a killer enough time to slip into Rachel's room and smother her with a pillow, thus ending her ramblings, which apparently concealed deadly secrets. Unraveling those secrets--some 60 years old--is a slow, difficult process with lots of suspects among friends and family. Maron achieves a delicate balance as she explores differences between mistakes, sins, and crimes, and shows that justice is not always arrived at by conventional means. Humor (e.g., Deborah outfoxes an unscrupulous auctioneer) and social issues (e.g., the difficult role of caregivers to the elderly) add to the warmth of a large family with all its foibles, squabbles, and quirks."—Publishers Weekly (Starred Review) on Designated Daughters