The Accidental Superpower: The Next Generation of American Preeminence and the Coming Global Disorder (Hardcover) 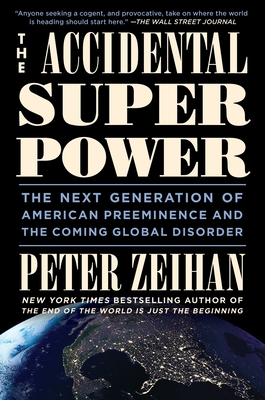 An eye-opening assement of American power and deglobalization in the bestselling tradition of The World is Flat and The Next 100 Years.   Near the end of the Second World War, the United States made a bold strategic gambit that rewired the international system. Empires were abolished and replaced by a global arrangement enforced by the U.S. Navy. With all the world's oceans safe for the first time in history, markets and resources were made available for everyone. Enemies became partners.   We think of this system as normal - it is not. We live in an artificial world on borrowed time.   In The Accidental Superpower, international strategist Peter Zeihan examines how the hard rules of geography are eroding the American commitment to free trade; how much of the planet is aging into a mass retirement that will enervate markets and capital supplies; and how, against all odds, it is the ever-ravenous American economy that - alone among the developed nations - is rapidly approaching energy independence. Combined, these factors are doing nothing less than overturning the global system and ushering in a new (dis)order.   For most, that is a disaster-in-waiting, but not for the Americans. The shale revolution allows Americans to sidestep an increasingly dangerous energy market. Only the United States boasts a youth population large enough to escape the sucking maw of global aging. Most important, geography will matter more than ever in a de-globalizing world, and America's geography is simply sublime.

Peter Zeihan launched his own firm, Zeihan on Geopolitics, in 2012 after working for twelve years with the geopolitical analysis firm Stratfor, where he was Vice President of Analysis.

"[A] lively, readable thesis on how the success or failure of nations may rest on the very ground beneath their feet...Anyone seeking a cogent, and provocative, take on where the world is heading should start here. Even if you don't fall in love with maps, you'll never look at them the same way again."— The Wall Street Journal

"In THE ACCIDENTAL SUPERPOWER, Peter Zeihan has explored a contemporary version of Napoleon's dictum that the power of countries derives from their geography. He brings a refreshingly novel and thought-provoking approach to understanding the rise of a U.S.-led global order, current threats, and why the U.S. will probably ride out the future better than others."—George Magnus, former Chief Economist and current Senior Advisor, UBS, and author of The Age of Ageing and Uprising

"An adventurous anatomy of how geography, demographics, and resources will sway the American future."—Laurence C. Smith, Professor and Chair of Geography at UCLA, and author of The World in 2050: Four Forces Shaping Civilization's Northern Future

"In THE ACCIDENTAL SUPERPOWER, Peter Zeihan deftly deploys his knowledge of demography and geography to show why America's growing energy independence will nurture its global dominance for the next quarter century. His contrarian thrust is a smart parry to forecasts of Washington's dwindling relevance in international affairs."—Stephen Glain, author of State vs. Defense

"[An] ingenious, optimistic overview of America's superpower status...readers will find it difficult to put down this fascinating addition to the 'rise and fall of nations' genre."—Kirkus Reviews (Starred Review)