The Beak of the Finch: A Story of Evolution in Our Time (Compact Disc) 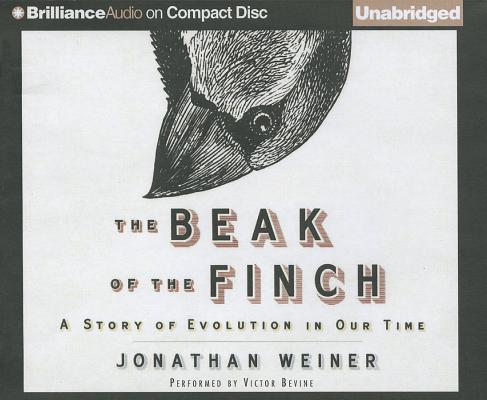 The Beak of the Finch tells the story of two Princeton University scientists--evolutionary biologists--engaged in an extraordinary investigation. They are watching, and recording, evolution as it is occurring--now--among the very species of Gal pagos finches that inspired Darwin's early musings on the origin of species. They are studying the evolutionary process not through the cryptic medium of fossils but in real time, in the wild, in the flesh.

The finches that Darwin took from Gal pagos at the time of his voyage on the Beagle led to his first veiled hints about his revolutionary theory. But Darwin himself never saw evolution as Peter and Rosemary Grant have been seeing it--in the act of happening. For more than twenty years they have been monitoring generation after generation of finches on the island of Daphne Major--measuring, weighing, observing, tracking, analyzing on computers their struggle for existence.

We see the Grants at work on the island among the thousands of living, nesting, hatching, growing birds whose world and lives are the Grants' primary laboratory. We explore the special circumstances that make the Gal pagos archipelago a paradise for evolutionary research: an isolated population of birds that cannot easily fly away and mate with other populations, islands that are the tips of young volcanoes and thus still rapidly evolving as does the life that they support, a food supply changing radically in response to radical variations of climate--so that in a brief span of time the Grants can see the beak of the finch adapt. And we watch the Grants' team observe evolution at a level that was totally inaccessible to Darwin: the molecular level, as the DNA in the blood samples taken from the birds reveals evolutionary change.

Here, brilliantly and lucidly recounted--with important implications for our own day, when man's alterations of the environment are speeding the rate of evolutionary changes--is a scientific enterprise in the grand manner, and abstraction made concrete, a theory validated in life.