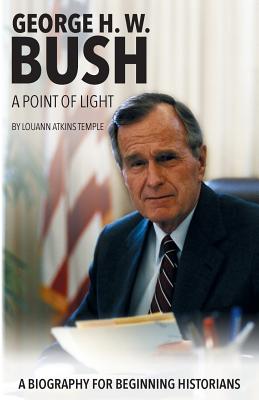 " A] warm and compelling introduction to the personal and professional lives of our forty-fi rst president. Readers young and old will find themselves wanting to know more about this great American leader."

George H. W. Bush: A Point of Light covers the bold and wide-ranging life of a modest man who was, in addition to forty-first president of the United States:

- a team player with little ego, yet fiercely competitive

After leaving his sedate Connecticut community for adventure in the Texas oil business, George Bush turned his attention to politics. He became a stalwart member of the Republican party, though he remained a low-keyed bipartisan. Thereafter, he became ambassador to the UN, and then CIA director. As president, he oversaw Operation Desert Storm, as well as the end of the Cold War.

More than a president, George Bush is a great man, and the lessons to be learned from his story can guide emerging adults into lives of outstanding character.

Louann Temple, a lifelong Texan, holds a bachelor's degree in English and a master's degree in American civilization, both from the University of Texas at Austin.

Her community activities have focused on arts and education, and through Austin Partners in Education, she has mentored middle school and high school students to prepare for college admission.

She aims to pass on her love of history, with its dynamic interweaving of personalities and events, to young people beginning to explore their own places in the world. She believes that history, particularly biography, is a valuable tool for this purpose. Two of her books for middle schoolers are sold at the LBJ Library and Museum: LBJ: The Can-Do President and Lady Bird Johnson: Deeds Not Words.