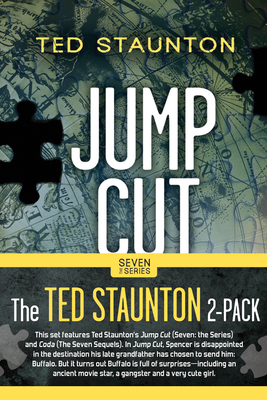 By Ted Staunton
Unavailable. Orders will be auto-cancelled.

This two-book set features Ted Staunton's Jump Cut, from Seven (the series) and Coda (The Seven Sequels). In Jump Cut, Spencer is disappointed in the destination his late grandfather has chosen to send him to: Buffalo. But it turns out Buffalo is full of surprises--including an ancient movie star, a gangster and a very cute girl. Coda continues Spencer's story as he tries to find his missing brother, Bunny, and ends up tangling with kidnappers, a pop star and a rogue alligator. Check out Speed by Ted Staunton (the Seven Prequels) and all the other books in Seven (the series), The Seven Sequels and The Seven Prequels.