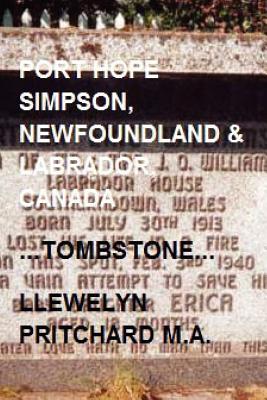 This is book number 5 in the Port Hope Simpson Mysteries series.

What was really going on behind the scenes? For the first time, declassified official British Government papers shine new light on amongst other things, Government mismanagement as knowledge hidden by an incongruous granite tombstone in Port Hope Simpson, Newfoundland & Labrador, Canada marked the starting point for this unique history of development of a logging settlement in southern Labrador. Original correspondence contained within a Public Enquiry into the Affairs of the Labrador Development Company Ltd. based in Port Hope Simpson from 1934 - 48 has finally come to light after being buried by the British Government. At the very least, it reveals when personal gain is in the ascendency over greater good of the people then only very shaky foundations are being laid down for future development. It shows that when the British Government realized its mistakes in backing the Labrador Development Company Ltd. venture in the first place, instead of being able to extricate itself from its financial commitments (at British tax-payers' expense before the start of The Second World War) the story only went from bad to worse. An illusion of development had been spun by John Osborn Williams, the owner of the Labrador Development Company Ltd. that subsequently led to the British Government (Dominions Office) shamefully deciding that the results of the Public Enquiry were best buried as far as local publication of its findings allowed. Discover a hoary tale of greed, money, cruelty, deception, Boom and Bust, Get-Rich-Quick, 1930s unsustainable industrialization of the Labrador forests and learn about the terrible economic hardship and poverty endured by the early settlers and their families. Read about a Newfoundland Ranger's view of living conditions in the Port Hope District from September 1940 to March 1942 and consider the protagonists' different motives for development as an obstruction of justice occurred regarding two unexplained deaths on 3 February 1940, as the shallow roots of unsustainable development took their terrible toll. A riveting story of political corruption, intrigue, horror and mystery that stretches from the individuals involved at the time to British and Newfoundland Government officials. The lessons of the past are now clear for all to see, as deeper roots towards a more sustainable future with proper, responsible government and more economic diversification around logging, fishing, travel and tourism are taking hold in Port Hope Simpson Town for its people and regional Labrador. Today, the R.C.M.P. case file located in the Department of Justice, St. Johns, Newfoundland & Labrador, Canada about the unexplained deaths on 3 February 1940 of Arthur Eric Williams, a Welshman and Erica D'Anitoff Williams his infant daughter in Port Hope Simpson must remain open until such time the Department has ensured in their own words, "the impartial administration of justice and the protection of the public interest through the dual offices of the Attorney General and Minister of Justice."http: //www.justice.gov.nl.ca/just/ Decide for yourself if a "cover-up" is still going-on today.

Llewelyn's collection of books includes the series: 1. Illustrated Diaries about European Budget Short-Break Holidays 2. Photo Albums 3. The Port Hope Simpson Diaries 1969-70 4. Port Hope Simpson Mysteries 5. The Voluntary Service Overseas in Labrador 6. Travel Handbooks Llewelyn has worked with The Honourable Canadian Senator William (Bill) Rompkey, on writing the history of the Voluntary Service Overseas (VSO) in Labrador. This is what Bill wrote in his letter to the first get- together of the VSO teachers at Pateley Bridge, North Yorkshire 1-3 August 2003, "...Labrador called to you and we are calling you now. I hope you will do what you can during these few days to fill in the Labrador record with your recollections and reflections. This too will be an important contribution to Labrador history. But mainly I hope you enjoy your time together. Llewelyn Pritchard has done a remarkable job in bringing you together. He is as shrewd as Holmes and as persistent as Poirot. He could even be a great Canadian! We owe him more than we can say. It's his event and I know it will be successful. All good wishes. Bill Rompkey"