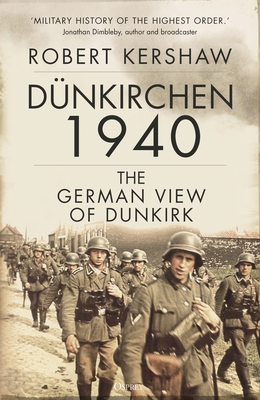 Using revelatory new material on an event which changed the tide of World War II, Robert Kershaw's ground-breaking history explores the Battle of Dunkirk from the German perspective.

'Kershaw's book is a welcome rebalancing; a thoughtful, well-researched and well-written contribution to a narrative that has long been too one-sided and too mired in national mythology.' - Roger Moorhouse, The Times

The British evacuation from the beaches of the small French port town of Dunkirk is one of the iconic moments of military history. The battle has captured the popular imagination through LIFE magazine photo spreads, the fiction of Ian McEwan and, of course, Christopher Nolan's hugely successful Hollywood blockbuster. But what is the German view of this stunning Allied escape? Drawing on German interviews, diaries and unit post-action reports, Robert Kershaw creates a page-turning history of a battle that we thought we knew.

Dünkirchen 1940 is the first major history on what went wrong for the Germans at Dunkirk. As supreme military commander, Hitler had seemingly achieved a miracle after the swift capitulation of Holland and Belgium, but with just seven kilometres before the panzers captured Dunkirk – the only port through which the trapped British Expeditionary force might escape – they came to a shuddering stop. Hitler had lost control of his stunning advance. Only a detailed interpretation of the German perspective – historically lacking to date – can provide answers as to why.

Drawing on his own military experience, his German language skills and his historian's eye for detail, Robert Kershaw creates a new history of this familiar battle. With a fresh angle on this famous conflict, Dünkirchen 1940 delves into the under-evaluated major German miscalculation both strategically and tactically that arguably cost Hitler the war.

A graduate of Reading University, Robert Kershaw joined the Parachute Regiment in 1973 and ultimately commanded 10 PARA. He attended the German Staff College, spending a further two years with the Bundeswehr as an infantry, airborne and arctic warfare instructor. He speaks fluent German. On leaving the British Army in 2006 he became a full-time author and a military analyst. He has recorded for BBC radio and published frequent magazine and newspaper articles. Two of his books have been serialized in the Daily Mail and the Daily Express. He lives in Salisbury, England.

“Kershaw's book is a welcome rebalancing; a thoughtful, well-researched and well-written contribution to a narrative that has long been too one-sided and too mired in national mythology.” —The Times

“This is military history of the highest order. Superbly written and drawn from richly original sources, Dünkirchen 1940 throws new light on what the British tend to regard as an heroic humiliation but for the Germans was a victorious sideshow. An abundance of vivid personal memories, woven deftly in a clear narrative, make for a truly gripping read.” —Jonathan Dimbleby, author and broadcaster

“Robert Kershaw's accurate and gritty account provides a fresh coherency to the German action in Belgium and France in the spring of 1940. His methodical approach dispels many of the myths surrounding Dunkirk.” —David Price, bestselling author of 'The Crew'

“Robert Kershaw has produced another superb book that demands a reassessment of the fighting at Dunkirk. In this highly readable and insightful account, Kershaw provides a much needed corrective to some of the assumptions made about the German forces using a new and underutilised sources. The result is blend of absorbing narrative history and clinical analysis, that deserves take its place among the great works about this totemic battle.” —Lloyd Clark, author of 'Blitzkrieg: Myth, Reality and Hitler's Lightning War'

“An impressive account – Kershaw uses a mass of eye-witness testimony to fashion a compelling narrative. In doing so, he offers an important reassessment of this pivotal moment in World War Two.” —Michael Jones, author of 'After Hitler: The Last Days of the Second World War'

“Robert Kershaw makes all the complexities of 1940 easy to comprehend. This is a first-class book by a master of his trade. He comfortably combines British, French and German voices in an epic story which traverses the tactical to the grand strategic. In each area, a new and refreshing telling of one of the most decisive years in British history, he demonstrates that he is master of all.” —Robert Lyman, author of 'A War of Empires'

“Kershaw tells an excellent story from a hitherto neglected viewpoint.” —History of War

"A myth busting history of Dunkirk" - Richard Overy, The Telegraph