4th Rock from the Sun: The Story of Mars (Paperback) 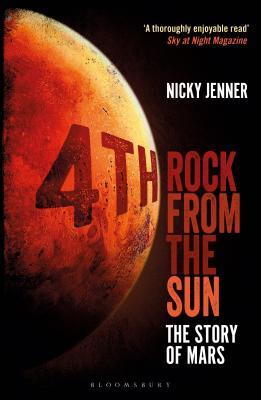 Everything you ever wanted to know about the Red Planet, revealed in an up-close and personal tour of Mars.

Mars is ingrained in our culture, from H. G. Wells's 1898 novel The War of the Worlds to Looney Tunes' hapless Marvin the Martian to David Bowie's extraterrestrial spiders. Ancient mythologies defined the planet as a violent harbinger of war, stargazers puzzled over its peculiar motion, and astrologers defined human personalities by its position.

Science fact is now surpassing science fiction. Robot vehicles have trundled across the planet's surface, beaming back views of its rust-orange surface, and have tested soil and atmosphere to get clues about how the planet has evolved and whether it supported (or supports) life. There are many more Mars missions planned over the next decade. And while little green Martians are now firmly the preserve of literature and film, there is growing evidence that the now-arid, frozen planet was once warm, wet, and possibly thronging with microbial life. One day in the foreseeable future, humans are likely to set foot on the Red Planet. What are the challenges involved, and how are we preparing for them? Is there a long-term future for humans on Mars?

4th Rock from the Sun examines Mars in its entirety--its nature, attributes, and impact on the 3rd Rock's culture; its environmental science and geology; and its potential for human colonization. Writing in an engaging manner, Nicky Jenner provides a comprehensive and spellbinding guide to the Red Planet.

Nicky Jenner is a freelance science writer and editor whose work has appeared in New Scientist, Nature, Astronomy Now, Physics World, and other publications. Jenner is a copywriter and editor for the European Space Agency and the European Southern Observatory (the organization responsible for both the Very Large Telescope and the upcoming European Extremely Large Telescope). This is her first book. A former European press officer for the Hubble Space Telescope, she lives in Hong Kong.

“Readers can launch into any section and discover something new and fascinating about our celestial neighbor. With several missions to Mars in the works and the Curiosity rover wheeling around it as we speak, digestible works like this will find a wide audience. Earthlings who dream of Martian colonies or are simply interested in the next frontier of exploration will learn a lot from Jenner's title.” —Library Journal

“An up-to-date and engaging overview for space buffs, sf fans, and anyone interested in separating the facts from the fiction.” —Booklist

“Nicky Jenner mounts a compelling case . . . [4th Rock from the Sun] serves to inspire the reader to root for this next potential milestone in human history.” —Science