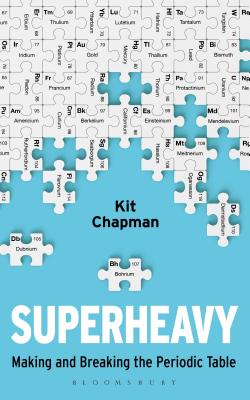 By Kit Chapman
Unavailable. Orders will be auto-cancelled.

An in-depth look at how elements are discovered, why they matter and where they will take us.

The science of element discovery is a truly fascinating field, and is constantly rewriting the laws of chemistry and physics as we know them. Superheavy is the first book to take an in-depth look at how synthetic elements are discovered, why they matter and where they will take us. From the Cold War nuclear race to the present day, scientists have stretched the periodic table to 118 elements. They have broken the rules of the periodic table, rewriting the science we're taught in school, and have the potential to revolutionize our lives.

Kit Chapman takes us back to the very beginning, with the creation of the atomic bomb. He tells the story of the major players, such as Ernest Lawrence who revolutionized the field of particle physics with the creation of the cyclotron; Yuri Oganessian, the "guerilla scientist" who opened up a new era of discovery in the field and is the only living scientists to have an element named after him; and Victor Ninov, the disgraced physicist who almost pulled off the greatest fraud in nuclear science. This book will bring us in a full circle back to Oak Ridge National Laboratory, where the first atomic bomb was developed, and that has more recently been an essential player in creating the new superheavy element 117.

Throughout, Superheavy explains the complex science of element discovery in clear and easy-to-follow terms. It walks through the theories of atomic structure, discusses the equipment used and explains the purpose of the research. By the end of the book readers will not only marvel at how far we've come, they will be in awe of where we are going and what this could mean for the worlds of physics and chemistry as we know them today.

Kit Chapman is an award-winning science journalist and broadcaster. Initially qualifying as a pharmacist, Chapman began his career on medical journal The Practitioner before moving to Chemist+Druggist, the UK's leading magazine for pharmacists. After stints as campaign website manager for the British Medical Association and clinical editor for The Pharmaceutical Journal, Chapman was appointed comment editor for Chemistry World. Chapman also writes for the Daily Telegraph and Sunday Telegraph, and has appeared as an expert for the BBC and Sky News.

“Making elements that don't exist in nature is one of the craziest, most painstaking and bold pursuits in all of science, and Superheavy tells that story for the first time, with wit and verve. This deeply researched and engaging tour of the nether reaches of the periodic table will delight and inform everyone from the expert to the reader with only the dimmest memory of the iconic chart of chemical elements on the school lab wall.” —Phillip Ball, author of Beyond Weird

“To anyone who imagines that the romantic age of elemental discovery ended in the 19th century, Kit Chapman's hugely entertaining account of the discovery of the elements past uranium will be a real eye-opener. Larger than life characters, strange stories of errors, improvisation, and luck (good and bad) abound here. With a solid introduction to the science underpinning the stability and separation of these mysterious and mostly ephemeral species, there is much for everyone to learn and connect with here.” —Andrea Sella, Professor of Inorganic Chemistry, UCL, and winner of the Royal Society's Michael Faraday Prize 2014

“With meticulous attention to detail and careful research, Chapman masterfully captures the excitement, politics and competition of the transuranic elements. Chapman's energy and enthusiasm is evident in every interaction, whether he is uncovering elaborate experimental details or unearthing scientific rivalries.” —Jess Wade, Physics Research Associate, Imperial College London