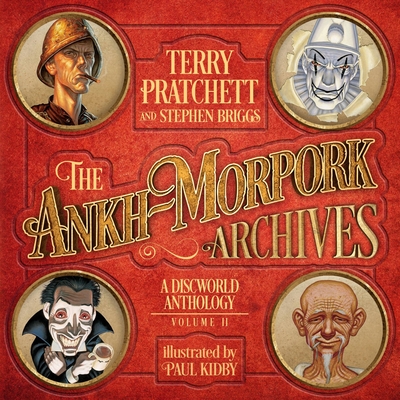 Containing material unavailable for twenty years -- this is a comprehensive guide to the capital city of Terry Pratchett's Discworld, getting to the heart of Ankh-Morpork's secrets, societies and guilds.

Ankh-Morpork is a bottomless pit of secrets. It's time to unearth a few more . . .

In the second volume of this confidential guide, brave travellers are made privy to the inner workings of more illustrious Ankh-Morpork societies.

Disabuse yourself of notions of professionalism under which you may hold the City Watch; discover what serious business is undertaken by the Fools' Guild (joking is no laughing matter); and, should you be lucky, achieve true enlightenment through the teachings of Lu-Tze.

One thing's for sure: after you've read this book, Ankh-Morpork's Guilds are going to need to come up with new ways of doing things.

Completely revamped and redesigned, this full-colour book contains material from Discworld Diaries across the decades.

Terry Pratchett (Author)
Sir Terry Pratchett is a publishing phenomenon. Among his many prizes and citations are the World Fantasy Life Achievement Award, the Carnegie Medal, the BSFA Award, eight honorary doctorates and, of course, a knighthood. In 2012, he won a BAFTA for his documentary on the subject of assisted suicide, 'Terry Pratchett: Choosing to Die'. He is the author of fifty bestselling books but is best known for the globally renowned Discworld series.

The first Discworld novel, The Colour of Magic, was published in 1983, and the series is still going strong almost three decades later. Four Discworld novels - Hogfather, Going Postal, The Colour of Magic and The Light Fantastic - have been adapted for television, with more to follow. His books have sold approximately 85 million copies worldwide (but who's counting?), and been translated into forty languages.

In 2007, Terry Pratchett was diagnosed with early onset Alzheimer's Disease. He died in 2015.

Stephen Briggs (Author)
Stephen Briggs lives in Oxfordshire and has been involved for many years in the sinister world of amateur dramatics, which is how he came to discover the Discworld. Having read one book, he was hooked and read the entire canon over the next three weeks. Oxford's Studio Theatre Club went on to stage his adaptations of WYRD SISTERS, MORT, GUARDS! GUARDS!...and many, many more. As well as compiling THE DISCWORLD COMPANION, THE NEW DISCWORLD COMPANION and, now, TURTLE RECALL: THE DISCWORLD COMPANION ... SO FAR, he has also co-authored the Discworld Diaries, the Mapps and has dramatised most of the Discworld novels. Stephen also now voices the UK and US Discworld audio books.

Paul Kidby (Author)
Paul Kidby discovered Terry Pratchett's Discworld in 1993 and since then has devoted his working life to the place. He is the illustrator of THE PRATCHETT PORTFOLIO, TERRY PRATCHETT'S DISCWORLD COLOURING BOOK, the bestsellers THE LAST HERO and THE ART OF DISCWORLD, as well as the Discworld DIARIES, cards, T-shirts, maps, mugs and, of course, the covers.