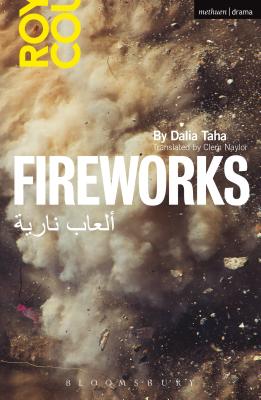 There's no-one in the streets but us. You run that way and I'll run this way. Whoever gets back to the front door first without getting shot, wins.

In a Palestinian town eleven-year-old Lubna and twelve-year-old Khalil are playing on the empty stairwell in their apartment block. As the siege intensifies outside, fear for their safety becomes as crippling as the conflict itself. Dalia Taha's play offers a new way of seeing how war fractures childhood. Fireworks (Al'ab Nariya) is part of International Playwrights: A Genesis Foundation Project and received its world premiere at the Royal Court Theatre, London, on 12 February 2015.

Dalia Taha is a Palestinian poet and playwright. She was born in Berlin in 1986 and grew up in Ramallah, Palestine. Her first play, Keffiyeh/Made in China, was produced by the Flemish Royal Theatre and A.M. Qattan Foundation, and premiered in Brussels before touring seven Palestinian cities across the West Bank. Dalia Taha is currently pursuing an MFA in Playwriting at Brown University and has published two collections of poetry and one novel

“By concentrating on their experience, Dalia Taha's play offers a refreshingly oblique perspective on the conflict in Gaza.” – Evening Standard

“. . . she [Dalia Taha] gives a vivid account of the psychic damage done to children growing up in a city like Gaza and of the elaborate pretences adopted by their parents to protect them from reality. . . . Taha's point is clearly that any hope of normality is fractured in a military crisis and that, while children are the immediate victims, the besieged adults are enmeshed in their own web of pretence. . . . Taha's play . . . offers a frighteningly convincing picture of the tragedy of lost innocence.” – Guardian

“Taha's writing, beautifully translated by Clem Naylor, is bracingly naturalistic, immersing us fully in her characters' tense, circumscribed lives through a series of vignettes. . . . This is a compelling example of the power of theatre to transport us deep into the human reality of a conflict from which, packaged on our television screens, it is far too easy to turn our minds.” – Observer

“This debut play by Dalia Taha is an intimate chamber piece, showing life in the shadows of a Palestinian town besieged by Israeli air strikes. . . . It's an undeniably powerful idea that is made all the more heartbreaking by the play's tragic outcome . . . It's a disconcerting, provocative jolt for the audience and proof that Dalia Taha is a young playwright of considerable promise.” – Daily Telegraph

“How do you protect your children from the harshest realities of the world without resorting to undue pretence or handicapping their preparation for adulthood? It's a hard enough problem for parents anywhere, but imagine if you were a present-day Palestinian in a town under siege. That's the situation that Palestinian writer Dalia Taha brings alive with remarkable power and insight in Fireworks.” – Independent