The Hunger of the Wolf: A Novel (Paperback) 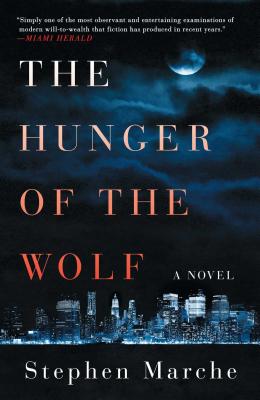 A “spellbinding” (Publishers Weekly) literary novel with fangs: a sweeping, genre-busting tale of money, morality, and the American Dream—and the men and monsters who profit in its pursuit—set in New York, London, and the Canadian wilderness.

Hunters found his body naked in the snow. The body is that of Ben Wylie, the second-richest man in America, and it is found in a remote patch of northern Canada. Far away, in New York, the son of the Wylie family’s housekeepers tries to figure out how and why Ben died. The answer lies in the tortured history of the Wylie family, who built up their massive fortune over three generations. All of the Wylie men struggle with a secret: they are werewolves. The threads of their destinies, both financial and supernatural, lead twistingly but inevitably to the naked body in the snow and a final, terrible revelation.

The Hunger of the Wolf is a novel about what it means to be a man in a world of money. It’s about the pursuit of wealth through the rising tide of America in the twentieth century, seen through the sober lens of more recent economic times. It’s a novel about the innate nature of violence: The Wylie men struggle to control their inner rage, through physical restraint, psychotherapy, drugs, hedonistic abandon, and good old-fashioned denial. It’s a story of fathers and sons, about secrets that are kept in families, and about the cost of the tension between the public face and the private soul—the cruelty and loneliness and occasional joy of being a magical being in a quotidian world.

A brilliant mystery from page one, “The Hunger of the Wolf is simply one of the most observant and entertaining examinations of modern will-to-wealth that fiction has produced in recent years” (Miami Herald).

Stephen Marche is a novelist and culture writer who has written for The Atlantic, The New York Times, The Wall Street Journal, The New Yorker, Esquire, and pretty much everywhere else. His books include three novels, Hunger of the Wolf, Raymond and Hannah, and Shining at the Bottom of the Sea, as well as The Unmade Bed and How Shakespeare Changed Everything. He lives in Toronto with his wife and children.

“Spellbinding . . . No word is out of place in this taut multigenerational tale.” —Publishers Weekly

“Brilliant . . . Marche has created a stunning, evocative, and impressionistic account of the ascent of wealth in the twentieth century. . . . The Hunger of the Wolf could be Marche’s breakthrough novel.” —Booklist, starred review

“Superb . . . Part realist portrait of upper-crust lives, part lycanthropic fairy tale . . . An entertaining, curious journey into the beating black hearts that occupy the penthouse suites and those who aspire to join them.” —Kirkus Reviews

“Superb . . . Part realist portrait of upper-crust lives, part lycanthropic fairy tale . . . An entertaining, curious journey into the beating black hearts that occupy the penthouse suites and those who aspire to join them.” —Kirkus Reviews

“A dazzling virtuoso piece. Marche turns the making of a family’s fortune into a fascinating, bloody fairy tale.” —Emma Donoghue, author of Room and Frog Music

“I read this book in basically a single sitting yesterday and have thought of little else since. It’s the kind of novel that makes me want to turn the last page and immediately turn it over and start reading it again. The Hunger of the Wolf is a modern masterpiece: The Great Gatsby for the new Gilded Age.” —James Frey